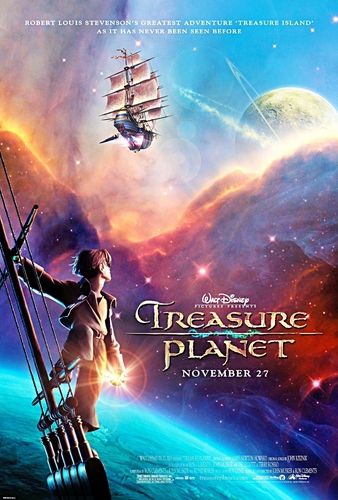 We start today the Back-to-School-Binge, as teachers need to return to school starting early next week, I figured to do one more binge over the weekend (mostly today) before the grind gets going.

I started the Back-to-School-Binge with one of Disney’s most underappreciated and overlooked animated films, Treasure Planet.  Based on the classic pirate novel from Robert Louis Stevenson Treasure Island, this film finds much of the Disney magic and artistry as the more well known films that preceded it.

Jim Hawkins (Joseph Gordon-Levitt) was a troublemaker with a heart of gold, working for his mother Sarah (Laurie Metcalf).  When a half dead pirate, Billy Bones (Patrick McGoohan), arrived, Bones, before he died, was able to pass along a map to the legendary Treasure Island to Jim.  He warned Jim to be wary of the Cyborg.

Of course, in the actual book, Billy Bones warned Jim Hawkins about the man with one leg.  Of course, that character turns out to be Long John Silver (Brian Murray), the chef about the ship that was chartered by Doctor Dopper (David Hyde Pierce), and captained by Captain Amelia (Emma Thompson).  With the ship’s unruly crew, they sailed off into space in search of the hidden treasure planet.

The story is reasonably faithful to Stevenson’s all time classic, with the obvious exceptions of the science fiction elements.  For example, in the novel, the character of Ben Gunn was one of Captain Flint’s crew he stranded on the island. In the movie, B.E.N. (Martin Short) basically serves the same function, but is a robot.

The animation is the typical quality work done by Disney in the late 90s early 2000s.  There are some lovely artistic scenes throughout the film.  Interestingly enough, B.E.N. is the only fully CGI character in the movie.

The voice work picked up dramatically as the film progressed.  Gordon-Levitt worked beautifully as Jim.  Early in the movie, though, Laurie Metcalf’s voice just did not seem to fit with the character of Sarah.  I also thought Martin Short was overly loud in his voicing of B.E.N.  However, among the well known voices, David Hyde Pierce did a wonderful job of not being David Hyde Pierce the whole time.  Pierce had done other voice over work, including A Bug’s Life, so his experience may have played a part.  The voice work from Brian Murray as Long John was spot on.

The beginning part of the film was a little slow, but it picked up into a wonderfully thrilling finale that came directly out of the characters that had been set up along the way.  This is a great way to introduce the world of Robert Louis Stevenson to a young person (or the Muppet Treasure Island, one of my own favs).

This would also be a great live action adaptation for Disney today.  Instead of doing the same old thing in Lion King and Aladdin, try something like this.