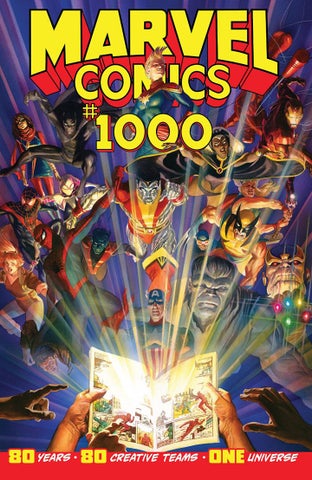 80 years of Marvel Comics is celebrated in one gigantic book featuring 80 pages with 80 creative teams.

That’s right, each creative team has one page to weave the story together.

I have to say, I was intrigued by the book and the format.  Some of the pages were extremely strong, some were weaker.  I did like the story that Al Ewing was credited with blending into the random feeling aspect of the book.

Sure, some of the major characters of Marvel Comics may have been shorted (such as The Fantastic Four), but there were a great deal of examples showing how various the Marvel Universe has been over the years.

I actually enjoyed the first part of the story a lot with the inclusion of a bunch of characters that I had not heard of before.  How these characters were blended into the fabric of the one universe concept was interesting.  I must say that the page with Star Wars felt out of place, though.  Of course, the Conan page felt as if it fit.  Strange, I know.

There were a ton of creative teams involved here and many special guests too.  The art was great.  I really enjoyed the different styles shown throughout the book.  Many of the pages were beautiful pieces of art.

The book had a disconnect at times, which I think is because of the way the format is set up.  However, I did not have much issue with this.  And I have to say that I loved the end of the book. The last couple of pages really brought the story to a strong conclusion.

It might have been challenging to read Marvel Comics #1000, but I was very pleased with the end result.

80 years is quite the accomplishment.  Here’s to 80 more!