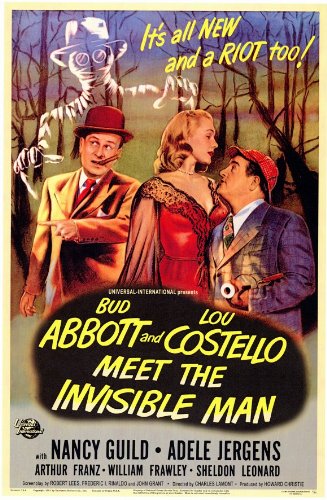 I guess technically, this one is not really a horror film.

You see, I loved Bud Abbot & Lou Costello when I was a kid and I wanted to do one of their movies during the time they were meeting up with the Universal Monsters.  However, I have already reviewed their most famous Monster film, Abbot & Costello Meet Frankenstein, so I found another one.

The Invisible Man was one of the Universal Monsters, so I figured this would work.

However, it is more of a crime drama than anything else.  Abbot & Costello are private detectives hired by an escaped felon named Tommy, a former boxer who was convicted of murder.  Tommy claimed to be innocent, and winds up taking the formula that was used by the original Invisible Man, John Griffin, to make him disappear.

The film had all the normal Abbot & Costello hi-jinks and had some great laugh-out-loud moments.  Lou Costello was a master of the reaction.  He was so funny when he saw something that scared him or surprised him.  As a team, Bud and Lou had impeccable comic timing, in both banter and physical comedy.  Even if you had seen the same routine or shtick already, you couldn’t help but laugh.  They were masters.