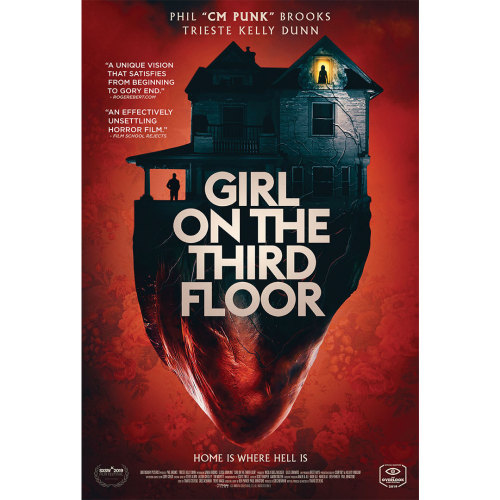 As a lifelong professional wrestling fan, I was excited when I heard on Collider Live that Phil Brooks was starring in a brand new horror movie coming out on October 25th.  Brooks, better known as the former pro wrestler C.M. Punk, left the WWE and pro wrestling over five years ago, leaving a gap in the sport.

So when I looked on Vudu today, I was excited to see that the film, Girl on the Third Floor, starring CM Punk was available.

Don Koch(CM Punk) was a disgraced investor who was starting over by buying a new house in the Chicago suburbs for his wife Liz (Trieste Kelly Dunn) and their unborn daughter.  The house needed plenty of work, but Don insisted on doing the work himself.  It becomes apparent quickly that the house held more secrets from its past than anyone expected and that the house played on the bad habits of Don.

Don slipped into his bad behavior easily, showing himself to be an unlikable man and a poor husband.  Still, the fate that befell him may have been a tad extreme.

The film was a nice mix of humor and horror.  CM Punk does a good job in the lead role, which was impressive for his debut as an actor.  He had to carry bug chunks of the movie, especially in the first two acts.  The third act belonged to Trieste Kelly Dunn, who came in an killed it.

This movie does an admirable job of taking the fairly played sub genre of the haunted house movie and brought some originality to it.  The past of this house was as fascinating as anything else in Girl on the Third Floor.

There was another mysterious inhabitant of the house, named Sarah (Sarah Brooks).  Her past was important and well-developed.  The mysteries of the house were slowly revealed as the film progressed.  Even though they laid out a dramatically bad past, the film does not try to give her a break for her own poor behavior.  Sarah Brooks is top level creepy in this role and she does a solid job.

The film does become gory at times, but it does not go too far.  There is a painful scene involving Don’s dog that takes things over the edge, but it feels as if it fit into the narrative being told.

I was a huge CM Punk fan during his days in WWE so I am thrilled that he has gotten a horror film that is so well done.  Punk was great in the role and, hopefully, he’ll be able to parlay this into more in the future.