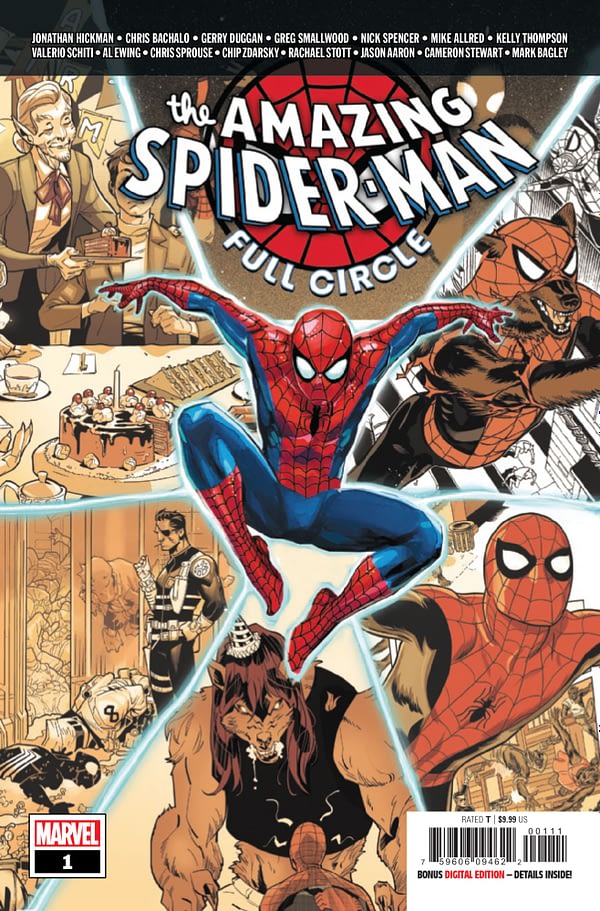 I actually love the gimmick of this comic.

According to the first page of Amazing Spider-Man: Full Circle #1, Marvel took seven creative teams to put together a Spidey story round robin style, picking up the story where it was left off.  The teams were given no plan prior to the beginning their process.  They would receive the pages from the previous creative team with no idea of what was coming.  The team would need to get Spidey out of the problems from the previous writer, move the story ahead and end with a cliffhanger for the next guy to work on.  The final chapter was everybody “scrambling together” to wrap everything up.

Apparently, none of the creators knew who was involved, except for the previous creators.  This felt like a gigantic improv game, and I loved the idea.  The story?  Not so much.

Unfortunately, the story was just too kooky and devolved into too much of weirdness.  It started out intriguing, but by the midway point, there were talking werewolves and time travel and everything was just too bizarre.

I understand that the story is meant to feel somewhat disjointed.  It is the design of the entire concept to put these writers/artists into this creative challenge and see what they can do, but I just did not like how they took the story.  Some of the ideas were taken in a different way that I just was not a fan of (ex. the whole “man in a box” bit turned into something unnecessarily nuts).

I would absolutely be in for another try of this gimmick (though the $9.99 price tag is too expensive for an experiment like this) and I think these types of creative ideas need to be used more to help bring an excitement to the comic book industry.  I would just rather see a story more involved in characterization than plot.