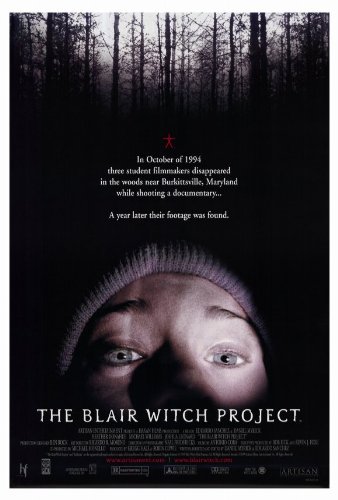 The final night of October means Halloween and, for EYG, the final night of the October Horror Binge.  And we end the month with a trend setting film from 1999 called The Blair Witch Project.

One of the eeriest aspects of The Blair Witch Project was the speculation that this was more than just a movie.  The set up of the film made it feel like it could be real, and that made things all just a little bit creepier.

Of course, the film is not real.  It just was one of the films that helped to start the “found footage” craze.  The film looked to have been filmed by the characters themselves on a hand held camera which increased the suspense and the psychological terror as we see and hear what these three student film makers would go through.

The story was that these three young filmmakers went into the woods of Maryland to shoot a documentary about a local legend called the Blair Witch.  As they head into the woods, they begin to have major problems. They get lost.  They get hungry.  And eventually, thy start turning on each other as they appear to be stalked by something in the woods.

We follow the attempts of the trio to find their way home, all the while knowing that they would never be found again.  There were some extremely successful scares in the film considering there was almost no gore or any clear shots of the witch.  The film builds its tension inside the heads of the three filmmakers and slowly drives them into a state of psychological terror.

There may be too many scenes of the characters just yelling for each other, but it certainly lent an uneasy level of realism to the project.  The conclusion of the film is as nerve-wrecking as anything you will see and yet you may have no idea what you are looking at.  It is a well done third act to a film that had many iconic moments.

While the concept may not have supported the length of film that it was, The Blair Witch Project succeeds much more than it does not in creating what feels like a wild fantasy in the woods of Maryland.  It is just real enough to make you wonder.. could this be true?  The marketing of the film is one of the greatest of all time and that is why, twenty years later, people still know The Blair Witch Project.