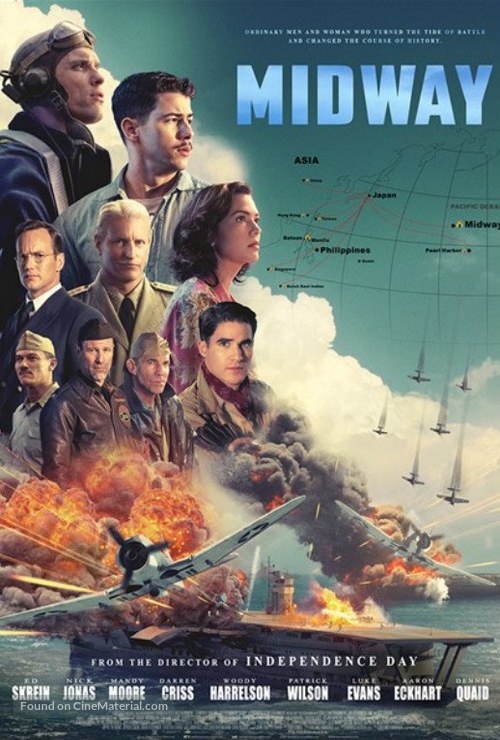 It has been several weeks since Midway came out and I have been unable to see it.  It was not that I did not want to see it, but it was not fitting into my schedule and facing other movies that I wanted to see more.

However, the Roland Emmerich directed film stuck around for a few weeks and I was able to see it today.

Because I knew that the score for Midway on Rotten Tomatoes was in the 40% range, I entered the theater with low expectations.

In the end, Midway was okay.  I enjoyed it enough.

This was the story of one of the most vital battles in the Pacific that helped turn the tide of World War II to the United States over the Japanese forces after the attack on Pearl Harbor.  The film contained a group of real people who were involved in the battle, providing a level of realness to the epic tale.

However, and this is the biggest problem of the movie, Midway never takes the time to really get to know these people.  The characters are sorely underdeveloped and the audience does not necessarily even know who was who outside of one or two characters.

I saw one character as Woody Harrelson with a blonde wig because that is who played him.  Patrick Wilson got a little focus, mainly because he tried to tell the people in charge about the attack on Pearl Harbor.  The codebreakers that he was in charge of were probably the most interesting part of the film, but were really delegated to the back seat.  In truth, these people, who in their few moments were shown as quirky, were the real heroes of this story.

The pilots were great and the CGI looked pretty solid, but many of these characters were interchangeable.  Ed Skrein’s character, Dick Best, was the lead of the pilots and had the most screen time.  Almost all of the others were just people.  When they would die, I felt nothing for them because they were just cannon fodder.

The action was good, but I had trouble telling the difference between planes and some of the air fights were hard to follow.  I did like how the film would go into the Japanese soldiers for the thoughts of their leaders.  It gave a face to the other side that you usually do not get in a war movie.

I’m not a huge fan of Roland Emmerich films, but this one is one of the better ones. Midway is not a perfect film by any stretch, but it was a good example of a war film where the most important aspect is the battle.