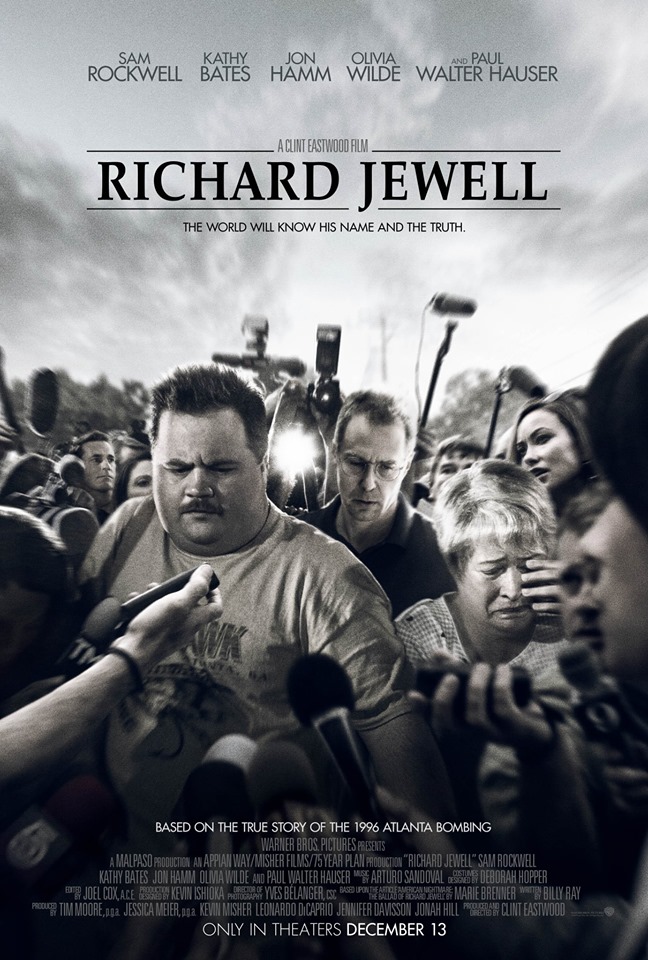 In my opinion, Clint Eastwood has not made a really good movie for awhile.  He made some okay ones (The Mule, Sully, American Sniper) and some really bad ones (The 15:17 to Paris, Jersey Boys, J. Edgar).  This time, with Richard Jewell, Eastwood feels as if he is back on track.

This is the true story of security guard Richard Jewell (Paul Walter Hauser) who was the person to discover the backpack that contained the bomb at the 1996 Olympics in Atlanta.  After a few days of calling him a hero, the FBI began looking at him as a suspect and the papers took that tidbit and ran with it.  Jewell had to face pressure on himself individually and with his mother Bobi (Kathy Bates) from the media constantly following him, camped outside their home and the perception of Richard as a bomber.

There are several strong performances in this movie that really help carry it.  The lead performance of Paul Walter Hauser is truly powerful.  He portrayed Richard as a man of principle and honor who had great respect for law enforcement until he could take it no longer.  His mother, played brilliantly by Kathy Bates, showed the pain and fear in every scene she was in.  Kathy Bates should really receive an Oscar nomination for this role.  Sam Rockwell was great as always as Richard’s lawyer, Watson Bryant, the eccentric lawyer who battled to give this man his life back.

There is a definite theme about the dangers of the media with how an untrue story can decimate a family, especially if the authority is not acting on facts.  The film also has some stings toward the FBI as well, as FBI agent Tom Shaw (Jon Hamm) tried several sneaky, underhanded tricks to try and get the naive Richard to implicate himself.  Shaw had formulated a theory and nothing was going to break him from that path.  Both of these can be plugged into today’s society easily.

The news media, in particular one journalist Kathy Scruggs (Olivia Wilde) is portrayed in a very cartoonish light, which makes her very two-dimensional instead of the potentially fully filled out character she could have been.  It is interesting that Kathy Scruggs was a real person, but the FBI Agent Shaw is a fictionalized compilation of an agent.  Neither character gets much in way of development with Shaw never admitting that Jewell was not guilty.

I think an argument could be made about this film being too political and aspiring to present Eastwood’s side of thought, but, during the film, I did not feel as if it was tilted.  It was only after reading some background info on the situation that I thought there may be some fire to go with the smoke.

Either way, I did like this movie much more than Eastwood’s recent work and it does provide three top notch quality performances from three great actors.  If you keep it at that, Richard Jewell is an enjoyable watch.