This is going to be my order for these shorts.  I will also follow up each list with which one I believe is going to win the Oscar.

#5.  Brotherhood.  A man returned from fighting is Syria with ISIS and arrives into a conflict with his father.  I did not like this one much at all.  The performances were fine.

#4.  Saria.  The true story of a group of orphans from an orphanage in Guatemala that attempted to flee to the US only to be recaptured.  Two sisters, including the titular Saria, are the focus of the tale.

#3.  Nefta Football Club.  A couple of kids intercepted a shipment of drugs crossing the border by accident and they do something total unexpected with them.  I enjoyed the structure of the film and it had some wildly funny moments.  I am torn between this one being #3 or this one being #2.

#2.  A Sister.  Or Une Soeur (Belgium).  A woman calls for help in the back seat of a car and the tension is ratcheted up to an unbearable height.

The Neighbors’ Window was the most entertaining of the five film, and had an intriguing twist at the end.  It did feel somewhat shaky at the very beginning because at first the husband seemed focused on the neighbors and then the wife got mad.  Then she became focused too.  That was a bit odd.  I really liked the Belgium film A Sister, but the ending seemed a little anticlimactic for as anxiety-ridden the film had been.  Nefta Football Club was really fun and probably has the best ending of the bunch.

Will Win:  Saria.  This is the true story that the Oscars seem to love and the relevance in the world today will take this to the gold.

#5.  Daughter.  A daughter recalls her relationship with her father in a hospital room and there is a bird involved.  The animation was interesting as the characters looked like paper mache puppets, but it got old real quickly.

#4.  Sister.  This one was actually about the Chinese plan to only allow a family to have one child.  It had some interesting moments with an annoying little girl bothering her older brother but the realization of what was happening felt preachy and fell flat for me.

#3.  Kitbull.  Charming and sweet, Kitbull is the relationship between a stray kitten and a pitbull.  This one was fun and cool to watch, but did not have that deeper message that the top two have.  This was highly entertaining though.

#2.  Memorable.  A man is losing his memory slowly.  Though never specifically stated, I immediately thought it was from Alzheimer’s Disease (though it could be another form of dementia too).  Artistically beautiful, particularly at the very end. 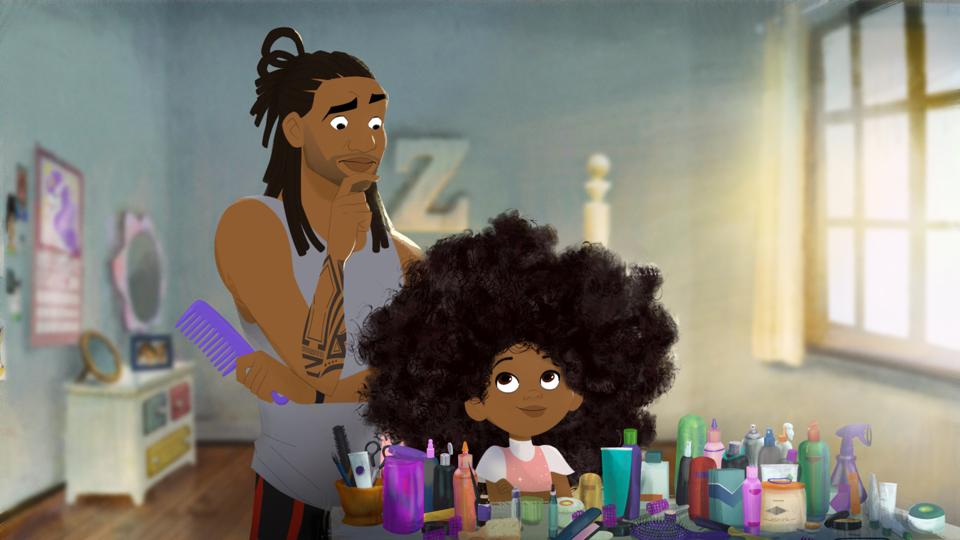 #1.  Hair Love.  I love this short.  The story of a little black girl who needs to have her hair done and only her father can do it.  This is so charming and heart-felt.  I had used it in my class to work on inferences and it was so great.

I loved Hair Love.  One of the greatest parts of this is the normalization of the African-American father who has dreadlocks and tattoos, but is shown as any other person.  It is funny and deeply moving.  Memorable was feeling heavy-handed and manipulative to me for the first half of the short, but my opinion changed at the end with one of the most remarkably artistic and beautiful scenes as our main character tries to paint the woman who he does not remember is his wife.  It is truly a powerful moment.  Kitbull is great and you can check it out on Disney + but it does not match the top two.

Will Win: Hair Love.  I think this one has the buzz about it, but it would not surprise me if Memorable sneaks in and snatches that Oscar away.  The others are simply also-rans.