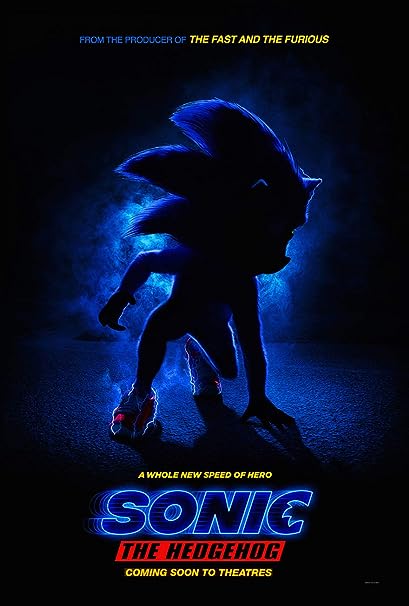 There was a massive controversy online over this movie last year.  The producers of the film released an image of the character design of the beloved video game character Sonic the Hedgehog and the fans of the product lost their minds on the internet.  It looked horrible and there was a backlash against it.  The producers of the film heard the audience and their outcry and decided to do something about it, redesigning the character to make it closer to the Sega video game.  It was a shocking happening from the studio to spend that extra money to make the fans happier.

Thank goodness they did it, because that character design would have dive-bombed this movie and it would not have been able to overcome.  Because of the extra loving care, what we wound up getting was a movie that was a lot of fun and an enjoyable film to watch.

Sonic the Hedgehog (voiced by Ben Schwartz) escaped his own planet to earth after being pursued for his power.  He had golden rings that allowed him to open a portal anywhere.  Sonic made a life on earth, hidden from the view of the people.  However, an accidental release of power caused a major black out, bringing the attention of the government.  The government sent part-human, part robot Dr. Ivo Robotnik (Jim Carrey) to the small town to try and find what caused the power outage.  Sonic had to take shelter with local sheriff Tom Wachowski (James Marsden). When Robotnik and his machines arrived at Tom’s front door, Sonic and Tom had to take off to find Sonic’s lost rings in San Francisco.

Jim Carrey is just having a ball as the evil villain Dr. Robotnik.  We have not see Carrey in this type of role since the 1990s and it is downright glorious.  Carrey is over-the-top in all the best ways and commands the screen as the lead villain.

The voice work of Ben Schwartz as Sonic is note perfect.  The voice fits beautifully with the new character design.  It is a good thing that the studio redesigned Sonic because the voice used by Schwartz would not have fit with the design they originally had planned.

This is probably the most charismatic and enjoyable I have ever seen James Marsden.  As Tom, Marsden was funny, charming and totally believable.  He and Sonic shared an easy chemistry which is vitally important since it was basically a buddy road movie.  I was immediately engaged with Tom and I found him extremely easy to root for during the struggles the film dropped them in.

The story was simple and predictable, but, in this case, I do not think that is a negative.  Instead of becoming too convoluted and trying to shove too much in, Sonic the Hedgehog had one basic plot and then depended on the interactions between its main characters, Sonic and Tom, as well as Dr. Robotnik.

Sure there are plot holes here and you could pick it apart if you want to, but the story is really secondary here to the interactions of the characters.

Sonic the Hedgehog is truly a film targeted for the young viewers. and, with that in mind, it succeeds tremendously.   As a family film, Sonic is a solid watch and should not cause parents to wish they had just dropped the kids off at the theater.  I would also say that if you are a fan of Sonic from the video games or animated series, this version will be to your liking.  I know there are some Easter eggs here from the series/video game that I missed, but longtime fans should find it awesome.  This includes a post credit scene involving a character that I did not know about, but others in my theater did (as I heard them speaking the character’s name in excitement).  Reminds me of the old days when Thanos appeared in the post credit scene of the first Avengers movie and not that many viewers knew who he was.

I hope this movie makes all the money this weekend and becomes a huge hit, if only for the reason of rewarding the studio for taking the time and spending the money to make the effects right.  It was important for the film to look right and they should be rewarded for that.  As a movie, it was a good time and I had a lot of fun.

One thought on “Sonic the Hedgehog”