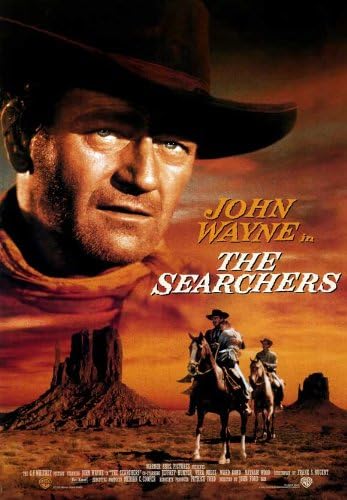 This was a movie that has been on my to watch list for awhile now.  It was introduced to me by watching the Top 10 Show and hearing John Rocha speak about it being his favorite Western.  I have not seen near as many Westerns as most other genres, so I wanted to give this a go and this morning fit the time perfectly.

The Searchers starred legendary John Wayne as Ethan Edwards, a hard nosed cowboy who returned to his brother’s home from the war.  After he returned, Comanche Indians attacked the house, killing several of the women and kidnapping two girls.  Ethan and some of the other men started out after the Comanche, who were led by the mysterious Scar (Henry Brandon) in an attempt to gain revenge and save the two girls.

Ethan Edwards was anything but a straight hero.  He was violent, hard-headed and stubborn, clinging to his own thoughts even if the evidence stated differently.  However, he was also a imposing figure that could be respected for his toughness.

This is perhaps John Wayne’s greatest role and he does an admirable job bringing the layers to a character that could easily have been one-note.

Some of the humor does not fit well in the film and some of the secondary characters are superfluous, but that is a minor criticism to make when the main character is such a ripe and vital creation.

The film is beautifully shot by iconic Western director John Ford, bringing the age of the Western into a different style.

If you have not seen The Searchers, you should absolutely seek it out.  It is one of the best Westerns I have seen and was a huge inspirations for the exceptional Westerns that followed.