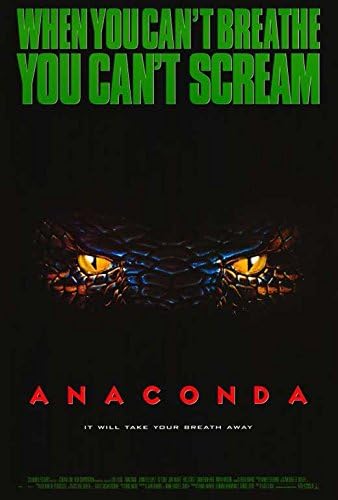 Brett Sheridan is one of the comedians who work on SEN Live, a show on the Schmoedown Entertainment Network along with Kristian Harloff and others. Brett does an imitation of Jon Voight as Paul Serone in Anaconda.

I had not seen Anaconda since the RiffTrax guys riffed it a few years ago,  but Brett’s imitation was funny so I chose today, as I was searching for something to watch, to rewatch the monster movie.

Do you know what?  Brett’s imitation was pretty spot on.  More so than I remembered.  His imitation helped to make this movie more watchable, just as the RiffTrax guys did.

Because this movie is horrible.

There are so many just campy, ridiculous, unintentionally funny moments in this movie that it makes one wonder if they were actually making a comedy.

I mean… flaming snake.  Vomiting Jon Voight up. The backwards waterfall.  Voight’s character in the first place.  Catching Jonathan Hyde in midair.  The inside shot of the anaconda’s mouth as she consumed Voight.

Seriously, there are comedy movies with fewer laughs than this one.

So this is one of those films that are hard to grade because I had a heck of a lot of fun watching it, but it is utterly horrible.  It was not meant to be as funny as it turned out.  It was meant to be a tense thriller.  It was not that.  It was a ridiculous mess.

I mean… that backward waterfall…