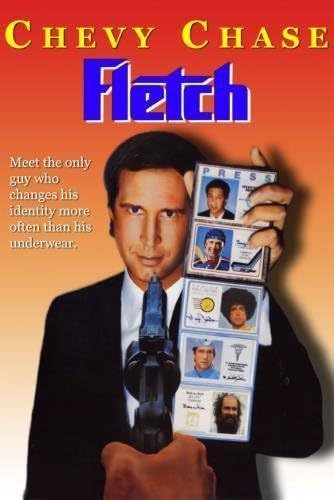 This is one of those movies that many of my friends think is awesome, but I have always avoided watching.  I am not much of a fan of Chevy Chase and Fletch feels like Chevy Chase to the nth degree.

Recently, Fletch turned up on a Top 10 Show and I know that Matt Knost has unbridled love for the film, so I decided that I would finally watch it, placing it on my Summer-Watch list.

Irwin “Fletch” Fletcher (Chevy Chase) was an investigative journalist who went by the name “Jane Doe”  He was working undercover on the beaches of Los Angeles on a story about drug trafficking when a wealthy businessman Alan Stanwyk (Tim Matheson) found him and asked him to commit a murder.  His own.

Stanwyk told Fletch that he was dying of cancer and he would be doing him a favor if he killed him.  He offered Fletch $50,000 to to the humanitarian thing.

This kicked off the central mystery of the movie, and Fletch, the investigative reporter, smelled a story.

I found this movie to be fine.  I certainly would not place it in the upper levels of comedy movies, but it is probably my favorite Chevy Chase movies.  It had some good laughs and Chevy’s zany banter was mostly entertaining.  Fletch was written with a lot of intelligence and was filled with a quick wit.  He felt very much like David Addison from Moonlighting.

The story beats worked fairly well and the investigation allowed you to try and determine what was happening as Fletch found out about it too.  The conclusion was a tad anti-climatic for my tastes, and perhaps somewhat unrealistic.  The whole thing of Fletch being picked by Stanwyk was fairly coincidental, but you are able to ignore those issues because the rest of the film is engaging.

I am glad that I finally watched it.  Check that one off the list.