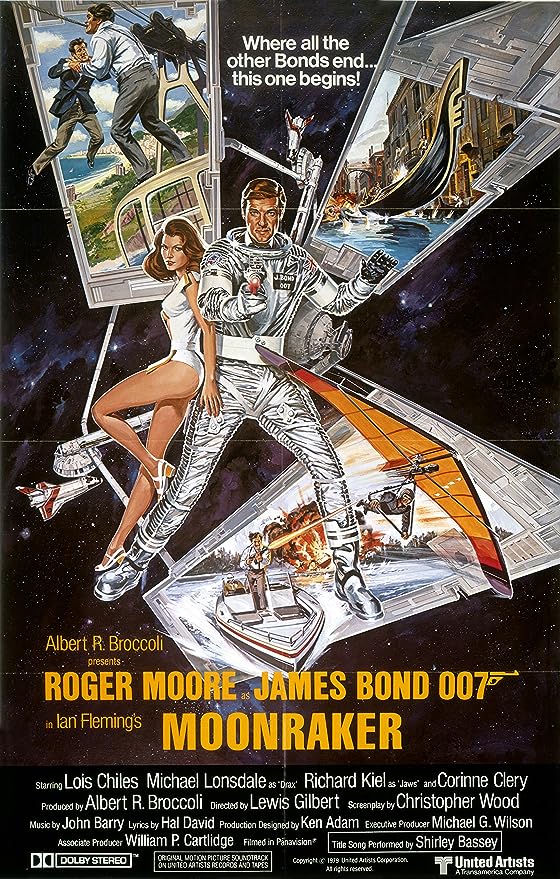 I had set a goal to watch Moonraker today, the next in line for the Bond watch.  Then, my internet/TV/phone service crapped the bed for a big chunk of the day.  Fortunately (perhaps), it came back in time for me to watch this Bond film.

I had never seen Moonraker before.  There are a few of the Bond films that I had not seen, specifically those whose reputation may be, let’s say, a tad shaky.

Shaky is kind.  This was dreadful.

It felt more like an Austin Powers movie than a James Bond movie.  And not in the good way.

The United States space shuttle Moonraker was hijacked in midair as it was on the way to be loaned to Great Britain.  James Bond (Roger Moore) was put on the case to investigate and he discovered a plot for global genocide.

The gigantic and, I guess, nigh invulnerable Jaws (Richard Kiel) was hired as muscle for Bond villain Hugo Drax (Michael Lonsdale).  Oh, and there is a Bond girl named Dr. Holly Goodhead (Lois Chiles).

The slapstick becomes way more than just campy in this film.  It takes all of the silliness and amplifies it 100% and then it doubles down on it.  The silly situations and the gadgets are just too much.  There was always elements of camp in the series, even the most serious of the films, but this takes that to an utterly absurd level.  Especially after the fairly well-balanced The Spy Who Loved Me that proceeded this in release.

In space, no one can hear you scream.. but they can hear the pew pew of lasers …and the crashing ships.  Oh, and astronauts do scream when hit with the pew pew lasers.  The third act of this is such a travesty that any positives that may have been in the earlier part of the film was absolutely ripped apart.  It is utterly ridiculous and not in the good way.

Space Bond simply is too stupid and does not work.  Amazingly, the Rotten Tomatoes score has this as a “FRESH” film.  I just do not understand.