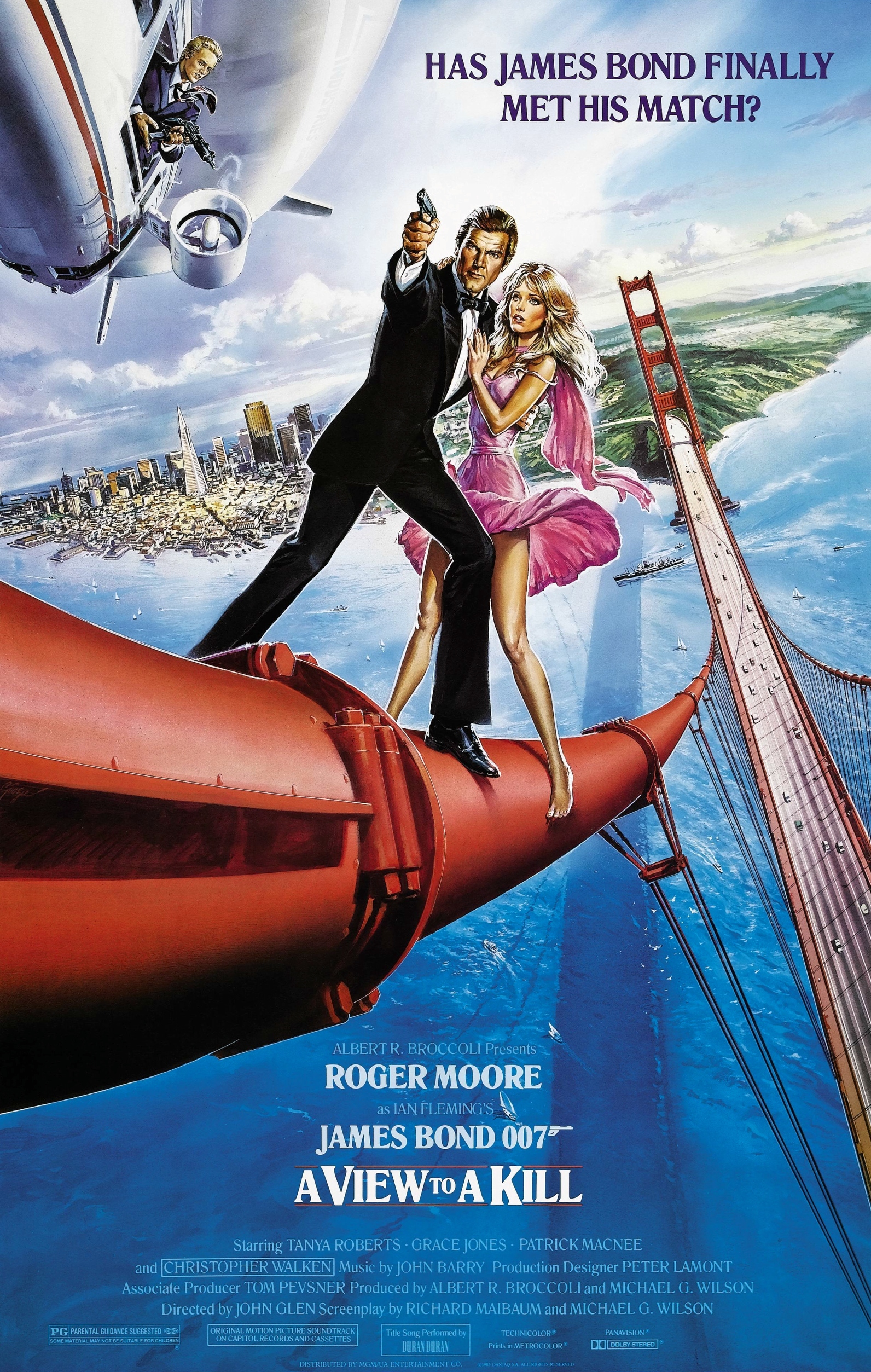 I love that song from Duran Duran.  The movie…not so much.

The final Roger Moore appearance as Agent 007 turned out to be one of the worst for the James Bond franchise to this point.

The nature of a lot of these Bond movies have become fairly repetitive.  Bond has to stop a bomb at the last seconds.  The villain is a powerful businessman with a seemingly powerful henchman/woman.  Heck, in A View to a Kill, Bond does more skiing marking the third or fourth time.

Another issue that I was thinking about was…if Bond is so well known as a secret agent, why do they continue to put him undercover without any sort of disguise?  You see in A View to a Kill how simple it was for Zorn (Christopher Walken) to find out Bond’s true identity and everything about him except his shoe size.  I would think that it would hinder the undercover work.

And I hate to continually beat a dead horse (which Bond seems to ride all the time as well), but why do these Bond villains not just shoot Bond in the head and be done with him?  Why do they continually leave him in some kind of death trap in which Bond “easily” escapes from?  You guys do use guns.  It reminded me of the old 1966 Batman series where the Joker or Penguin or whomever would leave Batman and Robin in a ridiculous death trap every episode.  At least there were no guns in Gotham at the time.  Bond bad guys have been letting James off the hook for decades now.

Another issue I had was a specific sound effect.  I actually heard this several times.  It was when a plane is getting ready to crash and it has this dive bomb sound.  Except, here, it was made for a helicopter, and the helicopter was just spinning around in midair.  It was a ridiculous moment and made me laugh out loud.

These are the thoughts I had while much of the first act of this film bored me.

As for A View to a Kill, Bond’s recovery of a microchip from a dead Double O (hence the skiing) leads him to a plot by industrialist sociopath Zorin (Christopher Walken) and his henchperson May Day (Grace Jones) to destroy Silicon Valley and corner the market on microchips.

The entire plot is gobbledygook as they attempt to use the fault lines to destroy the area of California.  The dialogue is pretty poorly written as well.  Walken is good as the psychotic Zorin and you can tell why Grace Jones does not get much to say as the silent assassin.

The action was not great either.  The entire fire truck chase scene was cringe-inducing and the fight on the Golden Gate Bridge made no sense.  Unfortunately, Roger Moore looked his age most of the time as well.

The characterization was also a problem for me, especially the inconsistent way that May Day was presented.  We have SPOILERS seen the henchman change sides in the third act before (aka Jaws in the travesty Moonraker), but at least I understood why.  He was in love.  I understand that May Day was left to die by Walken and that is why she is working with Bond, but why does this woman, who was happy to let millions die in Silicon Valley, become such a self-sacrificing hero at the end?  That did not make any sense and went completely opposite of everything I had been told or shown about May Day up until this point.  END OF SPOILERS

This was Roger Moore’s seventh and final Bond film and we also got the final appearance of Lois Maxwell, who had been playing Miss Moneypenny since the beginning.  This felt like a change for the Bond franchise as the films moving forward take a step away from the Roger Moore silliness of many of the past films.  A View to a Kill was a sad way to end Moore’s run.  He was the Bond that I grew up watching and, looking back, still hold with a soft spot.  Though he had a few big time stinkers, when the films were allowed to balance the camp with the serious, Roger Moore excelled.

And, once again, the title track by Duran Duran is most likely in the top 3-5 Bond songs in the entire franchise.  Truly wish there was a better film to go with such an epic tune.