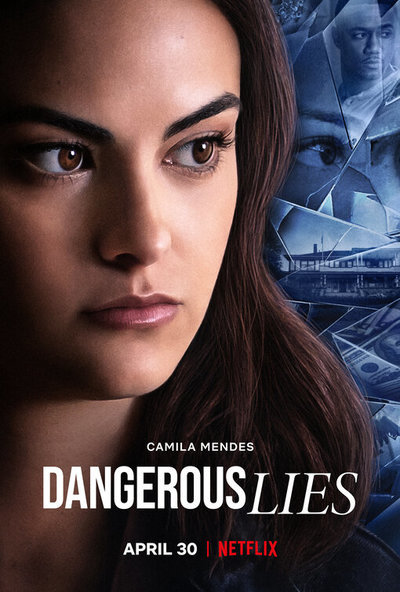 One of the new films that appeared on Netflix this weekend is called Dangerous Lies, a mystery/thriller that, despite a few glaring issues and a title that was anything but unique, I enjoyed quite a bit.

Katie (Camila Mendes) and Adam (Jesse T. Usher) are a young married couple with their share of money problems that threatened to overwhelm them.  Katie gets a job working taking care of a well-to-do elderly man, Leonard (Elliot Gould).  After four months, Katie and Leonard had grown close.  Leonard’s sudden death caused uproar in her life, but not as much as when she discovered that Leonard had recently had written a will leaving everything to Katie.

I enjoyed watching this movie, but, I have to say, the more I sit here and reflect back upon it, the more I notice plot threads that are not handled, twists that are truly coincidental and problems with the narrative.

The film, at its core, is a story about how greed and the promise of money can destroy a person and that how even good people can make poor choices when they feel as if they have no other possibility.  As the story unfolds, Katie and Adam make so many dumb decisions that it became frustrating at times.  You can see the bad decisions playing out in front of your face but there was nothing that you could do about it.

The film does a good job of playing its central mystery as if anyone could be involved, but, truthfully, the reveal of exactly what happened had some glaring questions when reflecting back on it.

The performances are solid.  It is good to see Elliot Gould in the film, although his part was minimal.  Both Mendes and Usher are likable and you want to root for them even when you wonder about possible hidden motives.  Sasha Alexander played Detective Chesler, a detective who seemed to feel as if something was off.

Unfortunately, there are too many coincidences that happen and it stretches the credibility of the story.