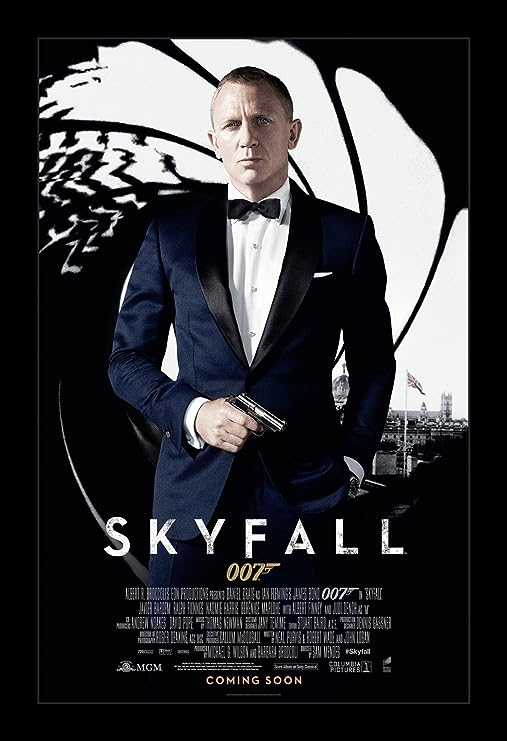 Skyfall is the third Daniel Craig James Bond film and it was my favorite Bond movie coming into the re-watch.  I was interested in seeing how it would fare this second time.  I had only seen the film once, and it blew me away then.

The cold open was strong and ended with a hugely dramatic moment.  Bond, shot and plummeting into the water, looked to be dead.  As he recovered in secret, a bomb at the MI6 office brought him out of hiding.

The attack on MI6 appeared to be targeting M (Judi Dench), as someone from her past has shown up with a plan.

Javier Bardem, who played the villainous Raoul Silva, and he was one of the very best Bond villains of the entire franchise.  He was menacing, dangerous and manipulative.

However, Bardem’s plan as shown in Skyfall is really a stretch and depends completely on coincidences or knowing things that you cannot know.  This was not something that bothered me the first time and does not make a huge issue this time, but it is something that I see and affects me.  It may be a minor truth, but it does take me back a step.

Judi Dench is magnificent here.  The first time, I heard someone talking in the theater and the end result was spoiled for me, mitigating my emotions for the situation (SPOILER… M dies)END OF SPOILER.  However, it is still a strong moment and it was just as powerful this time as before.

Skyfall feels as if it is a transitional film too, as Bond is being moved back into a more familiar situation with the re-introduction of Moneypenny (Naomie Harris) and Ralph Fiennes assuming the new position.  We also get a new Q (Ben Whishaw), though the gadgets are kept fairly realistic.  The joke about the exploding pens was very funny.

And… we were back to the carnivorous animals as a danger. No sharks or piranha.  This time…Gila monsters.

The ending sequence at Skyfall is utterly cinematic, with some of the best imagery ever seen in a Bond film.  The shots in the film are beautiful and rousing.  It does not surprise me when I discovered that EYG Hall of Famer Roger Deakins was involved.  He received an Oscar nomination for his work on Skyfall, and that is well earned.

The title track by Adele is one of the best themes recorded as well.  Skyfall has that perfect flow for the feel of this Bond film.  Adele deserved her Oscar win for that song.

In the end, I loved Skyfall, but, to be honest, it is not my favorite Bond film right  now.  It is close to the top though.  There is not much about Skyfall that isn’t fantastic and it is easily in the top 3 Bond movies of all time.