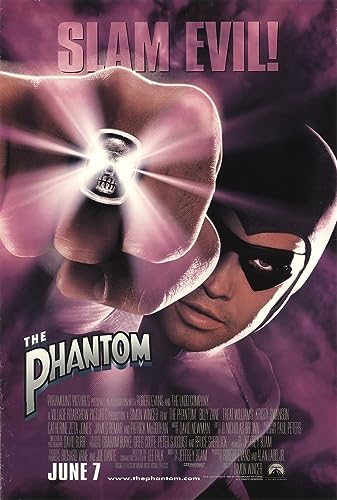 I have had a few instances recently of re-watching some films that, at first, I did not like, but upon the second watch, finding the film more enjoyable.  I wondered if that would continue by watching The Phantom.

Spoiler alert:  It did not.

The Phantom was horrendous.

It was actually way worse than I remembered it being.

The Phantom aka “The Ghost Who Walks,” secret identity of Kit Walker (Billy Zane), is the legendary, mythical hero of the jungle and he gets involved in a plot from businessman Xander Drax (Treat Williams) to uncover the magical Skulls of Touganda and claim the mystical power they control.  Kit’s old college flame Diana (Kristy Swanson) was involved too.  Oh and Catherine Zeta-Jones was a villainous sidekick for Drax, until she wasn’t.

The plot is an absolute mess.  There is no explanation of the plot.  Everybody just goes through the motions and people then drop some exposition moving along.

It felt like a super hero version of an Indiana Jones movie, but really less intelligent or less fun or less well developed.  This makes the Kingdom of the Crystal Skull look like a considerably better movie of this genre.

This is way worse than I remembered.  It is truly a bad film.