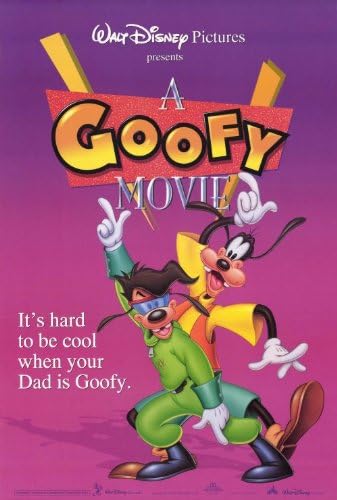 A Goofy Movie was an animated Disney film based on the TV cartoon.  What happens when Goofy has a kid and has t be a parent?  Hijinks.

It is summer vacation and Max (Jason Marsden) has set up a date with his crush, Roxanne (Kellie Martin) to watch the broadcast of a concert together.  However, a phone call to his father Goofy (Bill Farmer) from the Principal (Wallace Shawn) puts Goofy into a panic.  Goofy decides to take his son fishing following the same path that his own father had done with him.

There really isn’t much to the plot.  It honestly feels like an episode of any other TV show, just extended out to an hour and a half.  If you have ever watched a family comedy on TV, then you have seen the “twists” that happen here, just with that Goofy flair.

The music was catchy, but forgettable.  I just watched this not an hour ago, and I cannot recall any of the song titles or melodies.

The film does a good job of portraying adolescence and how the relationship can be between a father and his son.  It is not all sweetness.  Teens can be a nasty bunch and they are embarrassed at parents, no matter how much they may love them.  Goofy and Max have that relationship and we are exposed to the connection between them as the film moves on.

A Goofy Movie was fine.  The film would, most likely, be a big hit among the kids while the parents would not hate themselves for watching it.  It may not be a massive success, but it was far from a flop either.