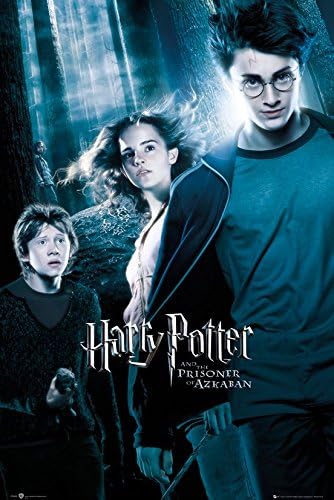 Day three of the EYG 8 Days of Potter brought me what I have considered, prior to this re-watch, the best Harry Potter movie of the bunch.  Harry Potter and the Prisoner of Azkaban takes the franchise on a different path.

Year three at Hogwarts brings the next threat to the boy wizard.  The deadly Sirius Black (Gary Oldman) escapes from the prison Azkaban and everyone believes he was after Harry Potter (Daniel Radcliffe).  Black was convicted of murder and was reputed to have told Voldemort where Harry’s parents were, selling them out.

This movie broke the Harry Potter formula that the first two films followed closely.  Chris Columbus, who directed the first two, stepped aside and gave way to Alfonso Cuarón.  Cuarón brought with him a dark tone, much darker than anything that we had seen from Harry Potter before.  The entire set up of the story and the execution of the plot are extremely clever and well done, completely different than the previous films.  Going in this direction truly transformed the Harry Potter series to more of an adult film as the young actors aged.

This is the first film where Dumbledore is now being played by Michael Gambon, after the death of original actor Richard Harris.  Gambon does step into the role well and becomes a great Dumbledore as the franchise progressed.

The Prisoner of Azkaban has some fantastic story twists that are difficult to see coming.  The way the third act is all weaved together is fun and works beautifully.

Gary Oldman packs a wallop into each scene, despite not having a lot of screen time.  This continued the ongoing mythology of the story without making it feel as if it were just a retread of what had come before.  David Thewlis was a great addition to the ensemble as the new Defense Against the Dark Arts Professor Remus Lupin.

The introduction of the Dementors is creepy and, at times, frightening.  These creatures are clearly going to be an important creature moving forward in the franchise.  They provided a real threat to our protagonists and an amazing imagery with them.

Mentioning about the imagery, the visual style of this movie is just tremendous.  Everything from the Dementors to the cinematography to Buckbeak the hippogriff is just a visual masterpiece.

I enjoyed the cold open at the Dursley’s house.  I am not sure why Harry has to keep going back to these people.  He has a ton of money int he bank, couldn’t he rent a room from the Weasleys?  Or maybe stay at Hogwarts?  I just find this to be one of the weakest parts of the movie.  However, blowing Uncle Vernon’s (Richard Griffiths) sister Aunt Marge (Pam Ferris) up and having her float away was an early film highlight, as was the insane bus ride after.

The young actors have really grown into their roles.  At this point, the Harry Potter actors are capable of handling more adult and deeper themes and their performances now elevate the work around them.  Emma Watson, in particular, has become a strong actor and can handle more emotional worth.