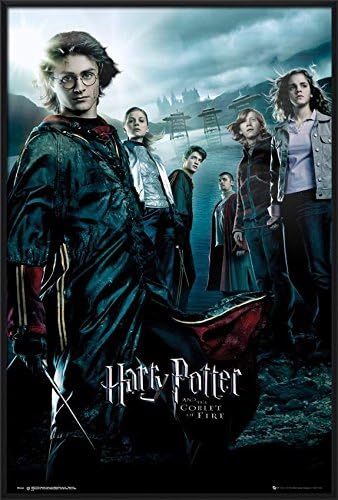 It is Day 4 of the EYG 8 Days of Potter, and we are up to Harry Potter and the Goblet of Fire, and the Potter franchise took a big step back with this installment.

Harry Potter (Daniel Radcliffe) returns to Hogwarts, which was hosting the Tri-Wizard Cup.  Three representatives for each school are picked out of the Goblet of Fire and it was intended to be open to 17 year olds only.  However, Harry Potter’s name mysteriously popped out of the Goblet of Fire along with the other three competitors.  The four competitors are put through the dangers of the tournament.

I had a lot of issues with this film.  While the ending of the film is extremely dark and well done, very tragic and powerful, there are so many parts here that just do not work.

The first issue I had was how Harry and Ron were fighting with each other early.  They turned on one another really quickly and it was not realistic.  Why would Ron not believe Harry that he did not put his name in the Goblet when he told him?  He reacted with so much jealousy that it made the whole first act or so feel wrong.  As quickly as they broke apart, they came back together as quickly… or when the film needed them to.  The whole interconnection of the kids was messed up during this movie.

The dance scene was a waste of time as well.  I understand that it is meant to show the awkwardness of teenagers and their uncertainty with the opposite sex, but why would Harry Potter, one of the most famous wizards in the world, have difficulties finding a date for this dance?

The three other competitors in the Tri-Wizard cup were almost totally ignored.  I had no idea anything about any of them.  The only character who received even a little bit of development was Cedric Diggory (Robert Pattinson) and, honestly, there was not much there.  Imagine how much more emotional the ending of the film would have been if you gave a crap about Cedric in a meaningful way.

The characterization of Hermione (Emma Watson) was stalled in this movie as well as her part was reduced to simpering teen who was upset with Ron.  She is a much more deserving character that was she got here.

I had real problems with a lot of the motivations of the characters in this movie.  At least we did not have to waste time with Uncle Vernon in this movie.  I liked the new opening to the film.  It still made the way Ron and Harry approached one another make even less sense.

I did like the underwater sequence in the race as it really showed the heroic side of Harry Potter.  Other than that, the competitions are wastes of time.

The film continues to look great, but this one truly was not nearly as entertaining as the early films, nor anywhere close to Prisoner of Azkaban.