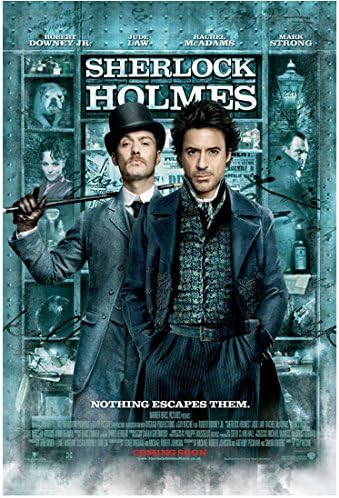 Robert Downey Jr. has remarkable charisma and it is on full display in his remake of the classic literature character, Sherlock Holmes.

Sherlock Holmes gets himself involved in the capture of Lord Henry Blackwood (Mark Strong), a serial killer reputedly involved in the occult.  After the execution of Blackwood, the killer makes an apparent return from the grave to gain control of all of England.

Part of the charm of this film is the bromance between Robert Downey Jr’s Sherlock and Jude Law’s Dr. Watson.  They have tons of chemistry with each other and their banter and dialogue elevates everything that they do.

Of course, they have more than just their performances.  This story is smart and clever.  The way the film displays the notable ability of Holmes to make observations is original and creative.  The film takes us into Sherlock’s head as he plans through every move that he is going to make.

Guy Ritchie directed this film and there are a lot of Guy Ritchie touches here.  Those traits actually work very well in this film.

Sherlock Holmes is an iconic character and this film helped bring him into the new world of feature films.  Holmes and Watson truly brought the buddy adventure to Victorian England.