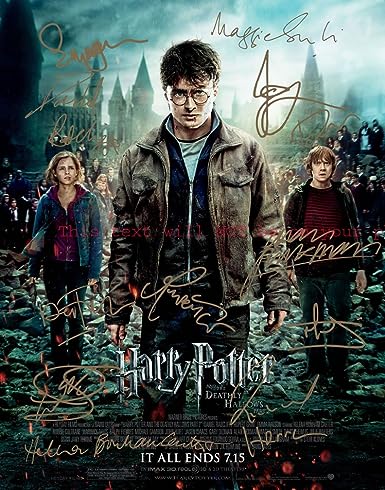 With this, the EYG 8 Days of Potter come to an end with the second part of the finale, Harry Potter and the Deathly Hallows.  Of course, we are not including the nearly miserable Fantastic Beasts films in our 8 Days of Potter.

Last year, one of the criticisms of Avengers: Endgame was that someone who had never seen another Avenger movie would have trouble jumping into the film. I always thought that was a silly criticism, but you could absolutely say that about Deathly Hallows Part 2 (even if you combined the finales).  Yet, I am not sure why you would start with the last film of the series if you were ready to watch a Harry Potter film.  There is no doubt that if you were unaware of the Harry Potter lore, you would not know what is going on or who most of these people were.

Having said that, this is a really epic conclusion to the Harry Potter franchise, providing the fans with a satisfactory end to the story.  The film wraps up the plot holes well and delivers answers to the lingering mysteries.  Splitting the conclusion into two parts yielded the filmmakers the opportunity to not spare the scenes.

Whereas Deathly Hallows Part 1 was more devoted to quieter character beats, Part 2 is loaded with action and battle.  Part 2 is a war movie.  Two sides gathering to fortify their sides and prepare to mount their offensives is quite powerful.  You knew there would be casualties and some of our favorites would not make it through this confrontation.  The feeling of inevitability washes over the audience and you find yourself holding your breath for much of the time.  When known characters appear on screen, you are holding tight that this would not be their final fate.

One of the problems of the film, which is also not a problem, is the fact that we lose so many of our favorites practically off-screen.  Fred Weasley (James Phelps), Remus Lupin (David Thewlis), and his wife.  I believe these characters, especially Fred, deserved a more noble death for as long as he was around.  Perhaps the idea is that this shows the senselessness of war and how death goes hand in hand.

The final confrontation with Harry and Voldemort (Ralph Fiennes) was tense and brutal.  Since I had not read the books, I remember the first time I watching this movie not knowing what was going to happen.  It was a distinct possibility that any of these characters could have fallen.

The end of Severus Snape (Alan Rickman) was unbelievably satisfying.  After seven movies of not knowing his motivation or being sure which side he was on, we get a beautiful answer that checked off every box and made sense.  It did not feel forced.  Every question worked with the answer and nothing felt left out.  Alan Rickman was brilliant in his final spin as Severus Snape.

Harry Potter and the Deathly Hallows Part 2 certainly hits the landing for the end of a franchise finale.  I do have to say that the “deathly hallows” themselves kind of wind up being unimportant overall, kind of a side note in their own film, but that is a minor complaint.  The acting is top notch from the entire cast.  The audience is given several moments of joy and sorrow, emotionally potent and nostalgically relevant.  The tag on at the ending is sweet and leaves the fans with deep happiness and satisfaction.  Among a cast that we grew up with, Harry Potter concludes with a bang.