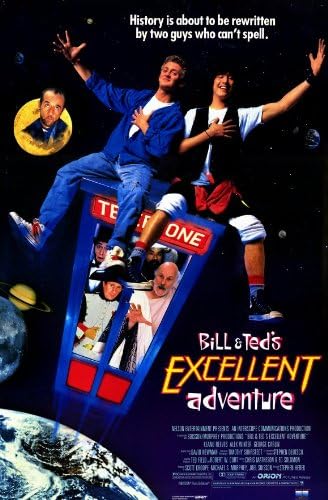 This morning, the teaser trailer for Bill & Ted Face the Music (the third in the series) debuted online and it inspired me to go ahead and watch the first of the series.  I have actually never seen Bill & Ted, never thinking that it was the type of film I would enjoy, but since I will most likely be seeing Bill & Ted 3, this felt like the right thing to do.

Surprisingly, I found this to be quite funny, clever and engaging.  Sure, there were stupid parts, but most of the stupidity was actually quite charming.

Bill (Alex Winter) and Ted (Keanu Reeves) were on the verge of flunking their history class which would result in Ted being sent to military school and the pair split up.  However, a man from the future named Rufus (George Carlin) arrived with a time machine and a plan to help Bill and Ted pass their history report by collecting some of the great figures in recorded history.

Yes, the story is silly and makes little sense, but you have got to expect that.  There was nothing that made me just hate watching it and the use of these historical figures is funny.  Yes, the idea of Napoleon (Terry Camilleri) at a water park and Genghis Khan (Al Leong) at a sporting goods shop in the mall are ridiculous and doesn’t work if you think too much about it.  So don’t think too much about it.  If you just let yourself embrace the idiocy, there is a lot of fun to be had here.

Both Bill and Ted are charming and lovable for the goofballs that they are.  If you accept them as characters, you cannot help but enjoy their adventure.

If you are looking for a specifically detailed and well-thought out plot with well reasoned scenes and an in-depth and well thought out use of time travel…well, this one won’t be for you.

Bill & Ted’s Excellent Adventure is light-hearted, goofy, and a ton of fun.  Is it dumb?  Absolutely.  Is it good dumb?  Yes, it is.  I did not expect to like this as much as I did.