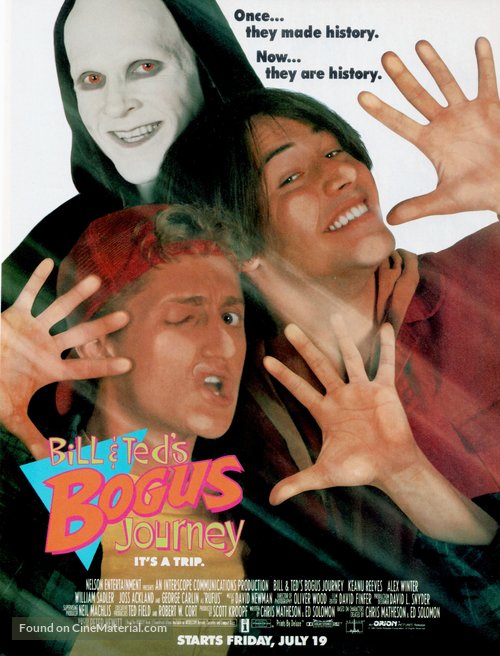 The sequel to Excellent Adventure took the franchise in a different path despite keeping much of what made the original film so fun.

The evil De Nomolos (Joss Ackland), a futuristic tyrant, created a robot pair of Bill & Ted to go back into the past and try to kill the real Bill (Alex Winter) and Ted (Keanu Reeves) and prevent the future from worshiping their music.

Of course, the evil robot Bill & Ted were able to outwit the witless real Bill and Ted and killed them, sending them into the afterlife.

And that is the start of the movie.

I liked this movie quite a bit too.  I may have liked this a little bit more than the first one.  It would be close.  This one has the same kind of silly story with ridiculous situations as the first one did.  There may have actually been more things tossed into the second film, most of which worked.

I think the first movie may have been a little funnier, but the biggest thing the sequel has that the original movie did not have was The Grim Reaper (William Sadler).  The personification of Death was a total epic character, stealing every scene that he appeared in.  William Sadler was clearly having a great time with the role and he really elevated the rest of the movie to a level above the first.

I also loved the song God Gave Rock N Roll to You, performed by Kiss.  This song had a major place in the story/plot.

Reeves and Winter continue to be great as the constantly lost Bill & Ted.  Honestly, I think they were a little less idiotic in this movie, perhaps showing some character growth…(nah).

I think most people seem to think this sequel is not up to the original, but honestly I believe I enjoyed it more.  Watching these two movies today has increased my enthusiasm to see the third film later this year (I hope).