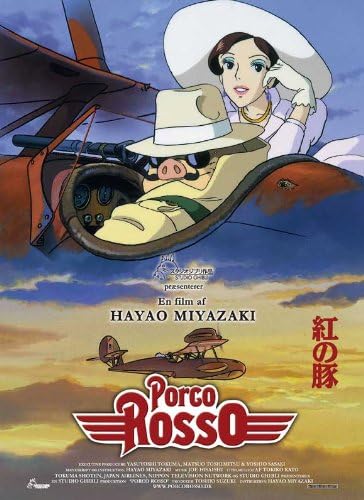 You’ve heard the one about when pigs fly, right?

Well, now I have seen everything.

Yes, the next Studio Ghibli film, once again from Hayao Miyazaki, is Porco Rosso, a film about an Italian World War I flying ace who has been cursed by being turned into an anthropomorphic pig.

That is what I said.

Porco Rosso is now a hired bounty hunter to track down air pirates.  Porco flies his recognizable red plane.  He winds up in a dogfight with an American pilot named Curtis.

I loved this movie.  It was the weirdest thing I have seen in a long time and it was funny, energetic and well written.  It has a feel of the old series called “Tales of the Golden Monkey.”

And to make it all the more awesome… the English dubbing on the Porco Rosso character was done by none other than Michael Keaton.  Seriously, could that be any cooler?

The flying scenes in this animation are just beautiful. The entire animation is amazing, much like all of the Studio Ghibli movies.

This one caught me off guard and I really had a lot of fun with this one.  There is a lot to this, even more than what you might guess about a sea plane flying pig.  If you have not seen this one, check it out.