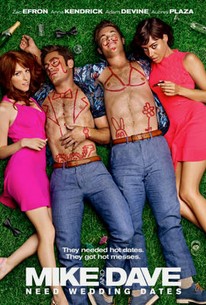 Okay, I didn’t hate this.

I really thought I was going to hate this.  I mean, this type of stupid, bad attitude comedy is not my cup of tea usually, and I am not saying that I liked Mike and Dave Need Wedding Dates, but it did not feel like a complete waste of my life.

Mike (Adam Devine) and Dave (Zac Efron) are brothers who have had a tough time growing up.  Their bad behavior and overt partying have ruined many family outings.  So in an attempt to be proactive, Mike and Dave’s father (Stephen Root) and mother (Stephanie Faracy) have come up with an idea to make sure that the boys do not ruin their sister Jeanie’s (Sugar Lyn Beard) wedding.  They insist that the boys bring dates instead of going stag and riling each other up.  But here is the catch.  It must be “nice” girls.

Mike and Dave place an ad on Craigslist as a way to find “nice” girls, looking for two girls to take with them to the wedding (which was being held in Hawaii).  Of course, a free trip to Hawaii stirred up the crazies and Mike and Dave saw many coo-coos.

Definitely not “nice” girls, Tatiana (Aubrey Plaza) and Alice (Anna Kendrick) saw the brothers on television and, since they both needed a vacation, concocted a plan to get Mike and Dave to take them.  In order for this to happen, the girls needed to pretend to be respectable.

And, if  you don’t see where this is heading, you haven’t seen this kind of movie before.  The story is as predictable as it comes.  It is completely paint-by-numbers with the most cliched end imaginable.  Go ahead, tell me what you think will happen…I will almost guarantee you that it will happen.

I really did not enjoy Mike either.  He is played as such an overbearing idiot who feels like it is a good idea to shout his lines every second that he became extremely annoying.  Some of the things he does is just so idiotic that it makes it hard to believe that his brother, the somewhat reasonable one, wouldn’t have told him to get the hell out of his life before this.

I thought Zac Efron was pretty good in this role, even though he has played the same type of character many times.  Efron does have some comedic timing and he helps make several of the jokes hit.  He also has a nice relationship (albeit predictable) with Alice, who he helps get over her tragic break up with her ex at the altar of her own wedding.  Efron and Kendrick work well together.

Plaza and Devine both play similar characters, except for the fact that Plaza’s Tatiana does not require screaming every line.

Stephen Root is very funny as the boys’ consistently disappointed and angry father.

The humor is hit and miss.  There are some funny laughs, but they seem to come from times when the cast is allowed to create the humor themselves.  The funniest bit was the blooper real that played over the credits, showing the ad libbing skills of the cast.  Too bad there was not more of this.

While this movie is not good by any stretch, I did not completely hate it.  For this movie that I was really not looking forward to, should be considered a victory.