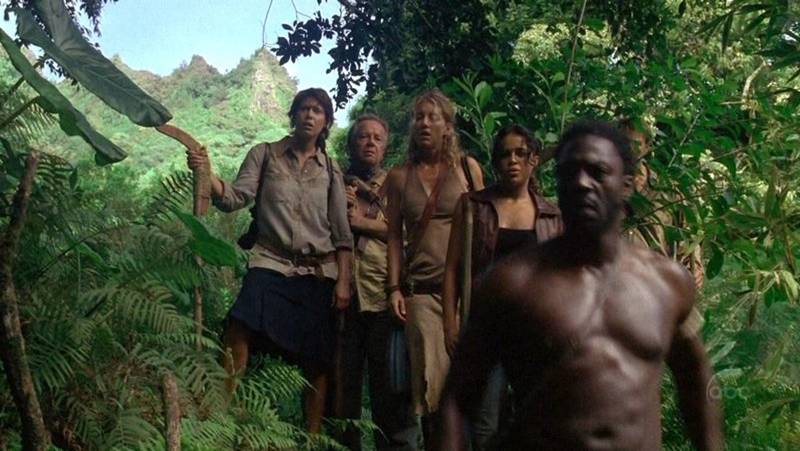 “The Other 48 Days” is the first all-Island flashback, as it focuses on the Tailies and the main situations they faced over the previous 48 days since the crash of Oceanic 815.

The Others immediately started coming for these survivors, attacking them the first night.  They took 3 people from the group and would have had more, if Mr. Eko had not killed two of them with a rock.

These actions did not sit well with Eko as he spent the next 40 days in a self-imposed silence, carving up his “Jesus Stick” as Charlie would eventually call it.

The Others returned again and grabbed even more survivors, including the children (one of which had been saved by Ana Lucia).

We knew from a previous episode that Goodwin would end up dead with a wooden staff in his chest and here we find out why.  Goodwin was sent to infiltrate the survivors and he came across Bernard in an airplane seat stuck in the tree. Ana Lucia talks Bernard through this, saving his life.

Goodwin continued to send intel to the Others, but Ana Lucia believed that it was actually Nathan who was the spy.  Ana Lucia knocked Nathan out and threw him into the pit she had dug.  She kept him in there for four days trying to get him to tell her where the kids were being held.  Of course, he did not know since he was innocent.

Before Ana Lucia could use the army knife she had found to cut off one of Nathan’s fingers, Goodwin let him free.  But, Goodwin broke Nathan’s neck with the hope that they would not be looking at himself as the spy.

Ana Lucia figured out Goodwin’s plans and confronted them after the group found a Dharma radio.  Ana Lucia and Goodwin fought and she killed him with her walking stick.

Later, Bernard was revealed to be the voice that Boone heard on the radio on the Nigerian plane just before it fell from the tree, crushing Boone with it.

The episode ended with a montage of scenes from previous viewed episodes, leading them back to the place where Ana Lucia shoots and kills Shannon thinking she was an Other.

This was the first episode of LOST that did not have Jack or Hurley in it.

Several Others were killed with this group way before Ethan showed up with the other group of survivors.