“There’s No Place Like Home, Part 2” was a two-hour finale that brought the season long Oceanic 6 storyline back around to the beginning and showed us everything that happened to get Jack, Sayid, Kate, Sun, Hurley and Aaron back to the real world, and continued to leave us asking questions about exactly what the hell is going on, including especially how did John Locke end up in the coffin?

So much to unpack here.  The season started back where season three ended, with Jack telling Kate that they needed to go back.  However, Kate did not just drive away as we thought.  She responded to this in a fairly negative manner.  Jack is already shaken, but this is the first place the name of Jeremy Bentham is dropped.  That is who is in the casket at the funeral home. Kate did not leave much question about her thoughts about making a return to the Island.

Later at the funeral home, Ben showed up and spooked Jack badly.  Ben said that the Island would not let Jack come back alone.  He had to bring all of them, including the guy in the casket.  The camera panned around and it ended season four with the shot in the casket of Jeremy Bentham…aka John Locke.  We have no idea how John wound up here. let alone dead.  Last we saw Locke, he was arriving at the Others’ camp like a long lost hero.

The other flash forwards all play into the storyline moving ahead into season five.  We see Sun in London, approaching Charles Widmore.  After a few moments of polite conversation, Sun turned on Widmore and wanted him to drop the bull.  He knew who she was and that her story was a lie and she knew who he was.  And she wanted to work together to reach common goals.  It had us wondering about the new attitude for Sun.  Plus, Sayid sneaked into the mental institution where Hurley was staying, after killing a man who had been watching the place for a week.  Sayid wanted Hurley to come with him.  Hurley mentioned that he had been having visitors from dead people for awhile now.  In fact, just before leaving with Sayid, Hurley finished the chess game up saying “Checkmate, Mr. Eko.”

Ben, who ended part 1 captured by Keemy and his men, get a last minute rescue from Kate, Sayid and the Others.  We were treated to the slugfest of Sayid vs. Keemy, a knockdown brawl for sure.  Richard interrupted it by shooting Keemy three times in the back, but someone has to explain to the people of this series that a nice bullet to the head is harder to shrug off.  We’ll see Keemy again later.  As of now, the Others let Kate and Sayid go back to the chopper.

Ben headed to the Orchid where John hasn’t found the elevator yet.  Jack was still there, grumbling his disbelief still.  Ben basically dismissed Jack and sent him off to the helicopter.  John and Ben took the elevator way down into the Orchid.  Once down there, Ben started doing all kinds of things and John was confused.  Ben said that Jacob told John what had to be done but he did not tell him how because Jacob wanted Ben to suffer the consequences.  If you move the Island, you cannot return to the Island.  Ben gives John another orientation tape with Pierre Chang, under the name Dr. Edgar Halliwax.  This station is about time travel.  Halliwax said that under no circumstances are you to put any metal into the chamber. As John is watching, Ben is loading the chamber up with all the metal he could.  Before they can do anything, the elevator starts coming down.

Meanwhile, on the freighter, Michael had come up with an idea to use liquid nitrogen to freeze the battery so that it cannot give off the charge when the signal comes in. They only have one canister so they had better figure something out.  The wiring was too complex for Desmond’s limited knowledge from the army.

Back in the Orchid, the elevator held Keemy, still alive and looking for Ben.  Keemy said he had a “dead man’s trigger” on him that if his heart stops beating, the boat would explode.  John tried to talk him down, but Ben sprung from out of the shadows with a knife, stabbing him several times in the throat while yelling “you killed my daughter.”  Ben anguish was clear, but John, trying to keep Keemy alive, said to Ben that he had killed everyone on the boat.  Ben responded with a “so.”

The helicopter had taken off from the Island with Jack, Sawyer, Hurley, Kate and Sayid, but there was a bullet hole in the copter’s tank, so they had to dump whatever loose weight they could.  After they were done, Frank said he would like it if they had another 200 pounds or so.  Sawyer whispered something to Kate, making her promise to do it and then he jumped out of the helicopter.  Sawyer started to swim back to the Island.

Despite Locke’s efforts, Keemy died, and the red light on the C4 on the boat went on.  It did not explode, but Michael realized it was just a matter of time as they were almost out of liquid nitrogen.  He told Jin to get out of there and go be with Sun and their baby.  This was Michael’s redemption as he continue to freeze the battery.

As the copter was returning to the freighter, Desmond was trying to signal for the helicopter not to land, yelling that there was a bomb.  Frank had to set it down, covered the hole with duct tape as they began to get ready to fly again.  They got some gas and they grabbed Desmond, Sun and Aaron.  Jack made Kate get on and they took off.  Jin came running out too late as the copter was already in the air.  The boat exploded.  Sun screamed bloody murder as she looked down begging to go back for Jin, but Jack finally stopped her by saying that he was gone.  The helicopter turned to fly them back to the Island. 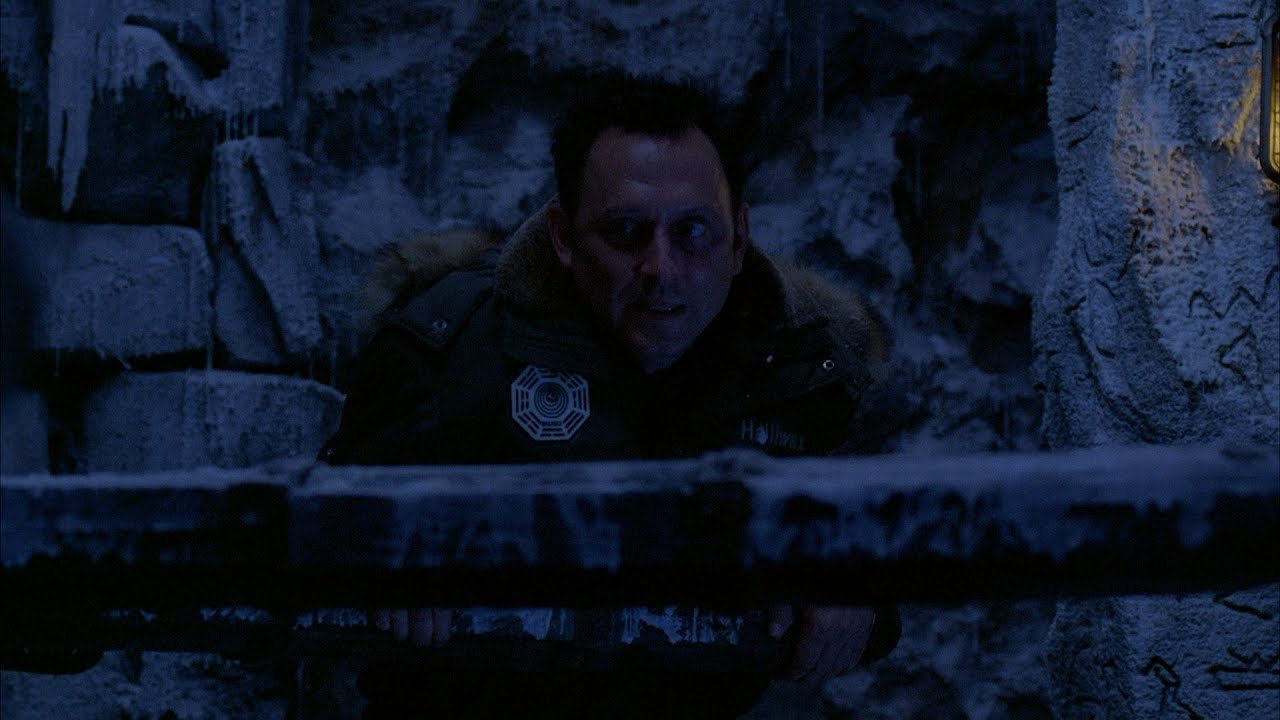 Ben tells Locke to go and be the leader.  He blew a hole in the chamber and climbed through a tunnel down to what looked like an ancient donkey wheel.  It was frozen and cold in this place.  Ben started working on getting the wheel to turn.  He is all dressed up like he was when he appeared in Tunisia in the episode “The Shape of Everything” which must occur immediately after he finished turning the wheel.

As it turned, everything began to rumble and glow and the Island disappeared.  Frank, who had the Island in his sights dis not understand what happened. The helicopter ran out of gas and crashed int he water.  They got a raft from the copter and they all were able to survive and swim to the raft.  Jack still denied that Locke was able to move the Island, but Hurley basically said, you got another explanation?  Not too long after this, a spotlight was shown on the raft and they saw a boat.  They were excited, but Jack, repeating something that Locke had told him, said they were going to have to lie about where they were.  It was the only way that they could protect those who stayed behind on the Island (Sawyer, Claire, Juliet, Rose, Bernard etc).  They did not like the idea but eventually agreed.

Surprise, surprise.  The boat that had found them belonged to Penny, and she was there.  She and Desmond had a wonderful reunion, one of the best moments of the episode.  Penny had traced Desmond’s phone call and had an idea of his coordinated and came after him.   Safe on Penny’s ship, the Oceanic 6 story came to fruition.  Desmond stayed with Penny and Frank stayed as well.

There was so much in this two-hour episode that it was packed full.  I did not expect the Penny and Desmond reunion so soon, and I, originally, was very concerned that Desmond would wind up dead since he did not come back with the Oceanic 6.  However, the reuniting with Penny could not have been sweeter.  The Oceanic 6 were all just shocked and dismayed over the events that found them returned to the real world.  Sawyer had swum back to the Island and found Juliet sitting there with some Dharma booze drinking.  He asked her is she was celebrating but she said she was not, pointing out the boat explosion that happened while Sawyer was swimming back.  This is the start of the brilliant relationship between Sawyer and Juliet over the final two seasons.