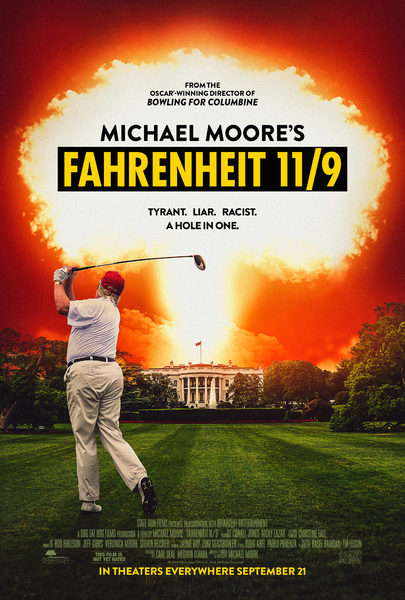 Here is another really solid documentary for the year.  There have been several great docs that I have seen, but this one is a little less inspiring than some of the others.

In fact, this one leaves you with a sinking feeling. A deep depressing sense that our country is facing a serious threat from within.

I have always tried to avoid being political on EYG because it is the easiest way to create divisiveness and I do not want that.  However, Michael Moore’s newest documentary, Fahrenheit 11/9 cannot be analyzed without taking the steps into the world of politics.

The film itself is well crafted and tells a strong story of how we came to be where we are right now, with the presidency of Donald J. Trump and how easily it could become more than what we expect.

To be fair, Michael Moore spends a chunk of the doc focusing on other issues that would be considered tangential to Trump’s America.  This included the poison water crisis from Flint, Michigan, the school shooting at Parkland, Florida and the teacher strike in West Virginia.  Moore brings these back around to Trump eventually, but he is not the only person who he goes after in this doc.  Michigan governor Rick Snyder is portrayed as a serious villain in this piece and, if anything close to what is shown here is true, then that man needs to be removed via vote immediately.  Democrats are not free of Moore’s wrath either as he calls out Bill Clinton, Barack Obama, Hillary Clinton and other long-time established Democrats in Congress for their roles in bringing us Trump as president.

The Obama part was particularly difficult considering how Moore showed the hope from the people of Flint when Obama came to the city with the expectation of helping the people only to have a glass of water in a stunt at a press conference.  That was seen as a betrayal from the Flint people and helped suppress the vote int he 2016 election in a state where Hillary lost by just a handful of votes.

It was also very painful to see some of the cell phone footage from inside the Marjory Stoneman Douglas High School at Parkland as bullets are flying around these kids.  The students who then stepped forward ready to make change in the world are all the more inspiring after seeing this documentary.

It is amazing to listen to some of the insanity that comes out of the mouths of some of these people, in particular, our Commander in Chief.  The film paints a horrific vision of a possible future and one that is not all that difficult to imagine.  See the film for yourself and make your own mind up.