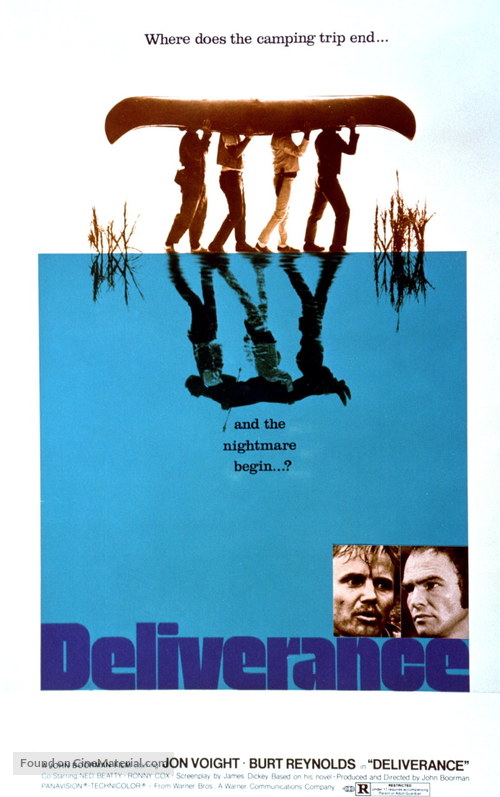 Burt Reynolds passed away recently at the age of 82.  I had never seen this iconic film from his oeuvre so I put it on the list to watch.

It was very disturbing of a film.

It started with the epic dueling banjos that was so fantastic.  About midway through the film, the horrible rape scene takes place (poor Ned Beatty) and the rest of the film was tense.

Honestly, the first part of the film featured Reynolds. but the second half of the film belonged to Jon Voight as Ed and Ned Beatty dealing with his own pain over what happened to him.  Burt was regulated to the sidelines with his injured leg.

I will say that the first part of Deliverance, after dueling banjos, was dull.  There was just too much canoeing going on.  It seemed to me that a lot of that could have been removed and it would have made the film a tighter feel.  However, once the hillbillies showed up with their plans of making poor Ned Beatty squeal, this film picked up the pace.

There is a lot of uncertainty in the film as well.  Drew (Ronny Cox) fell out of the canoe as the four friends reached the dangerous rapids.  Why was that?  Reynolds’ character claimed he was shot, but I am not sure of that.  I did not hear a shot fired nor was their any real evidence of that when they came across Drew’s body later.  It as a strange part of the story.

I have heard a lot of great word of mouth about this movie, but to me, it is, at best, okay.  The second half of the film was better and, of course, the Dueling Banjos song was tremendous.  Otherwise, there was the shock value of the rape and not that much more.

It is a solid film in the technical aspects, but I do not see it as one of the great films of all time. It certainly has some of the most iconic moments of all time, but moments do not necessarily make a movie.