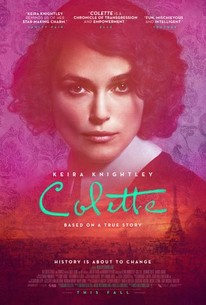 Biopic of Sidonie-Gabrielle Colette, a woman who married a famous writer who went by “Willy” and she became the secret author of his most successful series of books, based on her life, the Claudine series.

Keira Knightley played Colette in a remarkable performance.  She and “Willy” (Dominic West) had great chemistry and were a fascinating pair.  Watching the development of Colette from mousy young lady to a confident woman was great and showed off Knightley’s ability.

Early on, there were some slow spots and I do think that the movie could had benefited from being cut down a little bit as it does feel too long.  However, the performance is compelling and the film looks beautiful.