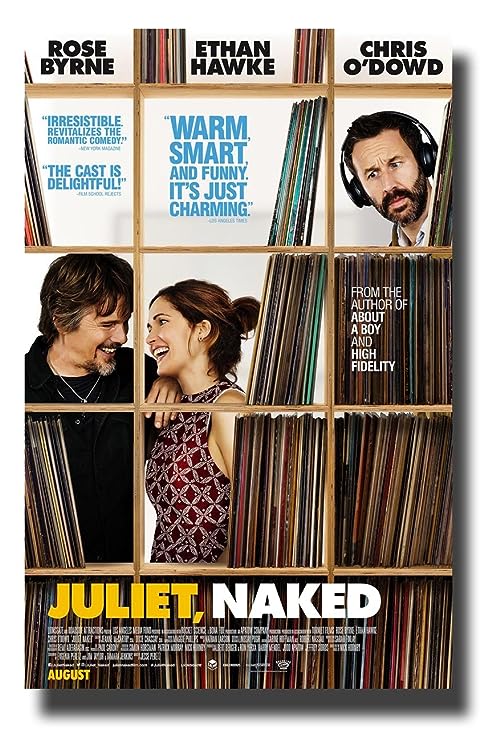 I had seen trailers for this movie earlier this year, but it never found ts way to any theaters in my vicinity.  However, when I saw this on iTunes, I was excited about getting a chance to see it at home.

And it was a good film.

Annie Platt (Rose Byrne) was becoming tired of her boyfriend (Chris O’Dowd) and his obsession with long absent rocker Tucker Crowe (Ethan Hawke). So when an album of Tucker’s music is unearthed and released, Annie takes the chance to write a scathing review of it.

Her boyfriend Duncan was mad at her, but she received a unexpected response.  Tucker Crowe himself read the review and agreed with her.  They then began a correspondence via e-mail and on the phone.

When she discovered that Duncan had cheated on her, their relationship ended.  However, Tucker’s minor heart attack made things even more odd.

This film is a sweet romantic comedy with a group of solid performances and a well written script.  The story itself feels a bit slight, but I did like the relationship between Rose Byrne and Ethan Hawke.  Then, Chris O’Dowd is pretty funny as the obsessed fan who finds his hero in an unexpected place.

The story of Tucker and his gaggle of children that he did not know he had was interesting, but it seemed to be over too quickly.

This is deeper than most rom-coms but, even so, there is not a huge amount of plot.  Most of the film is resolved after the hour and a half.

Rose Byrne is great.  She brings a lot of charm to the movie and the little boy who plays Tucker’s son Jackson (Azhy Robertson) was a nice addition.

Juliet, Naked is a nice film to watch on an evening when you do not have anything else to do.  It might be a bit too slight, but that does not keep it from being a suitable watch.