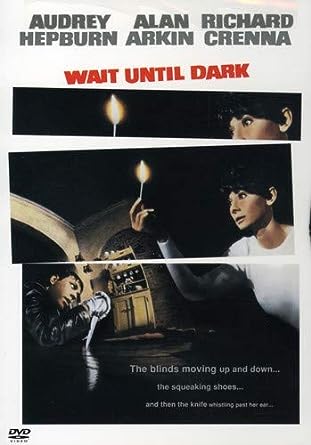 Okay, I was watching the live edition of Movie Fights tonight and they were having a Movie fights Championship match between the challenger Greg Alba of the Reel Rejects and the reigning, defending Movie Fights Champion, Dan Murrell.  It was a great episode with two extremely spirited debaters.  One of the questions was “Most Underrated Movie of All-Time.”  I mean… how do you answer something like that?  Well, Dan Murrell mentioned a movie entitled Wait Until Dark, starring Audrey Hepburn, Alan Arkin, and Richard Crenna, and he made it sound really interesting.

So, after the Movie Fights was over (No Spoilers), I went to YouTube and rented a copy of the movie.  And…holy crap, did I love this movie.

Seriously, it was one of the best films I have seen in a long while.  I can’t believe that I hadn’t heard of it before tonight.

Audrey Hepburn, who was nominated for an Oscar for this film, played Susy Hendrix, a woman recently blinded who was trying to cope with her blindness.  Her husband, played by Efrem Zimbalist, Jr, wound up unwittingly with a doll that contained something that the psychotic killer, Roat (Alan Arkin), wanted back.  Roat enlisted a pair of criminals, Mike (Richard Crenna) and Carlino (Jack Weston), to help him reclaim this doll.  It meant trying to fool the blind woman in a complex and intricate manner.

Susy Hendrix was nobody’s victim.  Despite her supposed weakness with her blindness, Susy was smart, quick-witted, brave, and yet vulnerable.  She was the most heroic of characters and I loved her completely.  The performance of Audrey Hepburn was off the charts and certainly deserved the Oscar nomination that it earned her.  She could have easily been shown as the victim of this movie, but she was able to see through the criminals’ lies and manipulations through her own brand of intelligence and resourcefulness.  I did not expect to see a female character this strong in a 1960s movie, but there she was.

Alan Arkin was unbelievably good as the evil Roat.  He was as compellingly wicked and menacing as could be.  Arkin was so great here that I had no idea what was going to happen and I was holding my breath as I hoped that Susy could make it through this problem.  Arkin was involved in a jump scare in this movie that scared the living crap out of me.  I literally yelled at the screen when it happened.  Dan Murrell had mentioned it in his argument on Movie Fights Live, but it still did not prepare me for how effective that jump scare was and how much I was actually shaken from it.

As a horror/thriller movie, this was fantastic.  The tension built throughout the film until the final moments, which was as amazing as you are ever going to see.  There may be a few plot holes here and there, but it is a 50+ year old film and it feels as relevant today as ever.  There are moments and scenes here that are obviously influential to other films of this genre moving forward.

Based on a 1966 play of the same name by Frederick Knott, Wait Until Dark has basically one set and all the drama and action takes place in this location.  Even though the below ground apartment is the only location, this film never felt boring or as if it needed more than what was there.  It felt like more than just a play on film (like Fences, a film starring Denzel Washington and Viola Davis did).  It created superior suspense and kept me riveted the entire time.

Thanks for the recommendation, Dan.