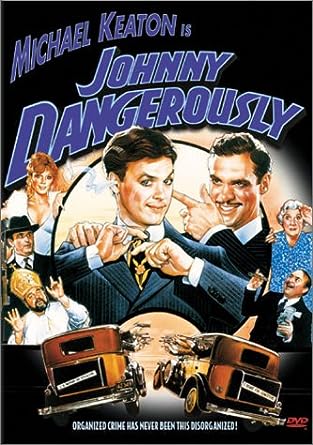 As I was doing some work today, I heard the “Weird Al” Yankovic song, This is the Life and I knew what I wanted to watch tonight.

“You lousy cork-soakers. You have violated my farging rights. Dis somanumbatching country was founded so that the liberties of common patriotic citizens like me could not be taken away by a bunch of fargin iceholes… like yourselves.”  -Roman Troy Moronie (Richard Dimitri)

Keaton’s Johnny Dangerously was in the mob, but he was beloved by most.  Since he was 12 years old, Johnny was the best at everything.  When he got a chance to make some money to help cover medical costs for his constantly ailing mother (Maureen Stapleton), Johnny couldn’t refuse the offer.

This movie has an amazing sense of humor.  The comedy here is top rate and makes me miss the days when spoof movies were more than just dick/poop/sex jokes.  I mean, there are sex jokes in Johnny Dangerously too, but there is way more here than just those.  The spoof on the gangster movie provides some rich material and this delivers.

The story is fast moving.  The characters are funny.  The actors involved look to be having a heck of a good time.

The film is as quotable of a film as you will find.  The dialogue is quick and witty.

The charm of Michael Keaton as Johnny Dangerously is off the charts.  He is the main reason why this all works.  He holds this movie together with his bad boy smirk and the sparkle in his eyes.

“Did you know you’re last name is an adverb?” -Lil (Marilu Henner)

I wish there were more spoof movies like this or Airplane, or The Naked Gun series.  There is an intelligence behind these films and are not just a mean-spirited film like many of the recent spoof movies are.  Johnny Dangerously is a heck of a good time.