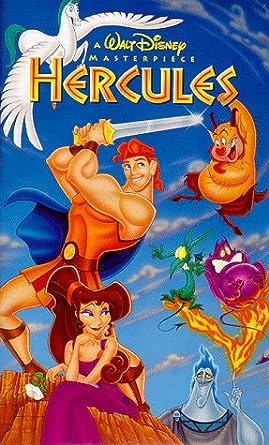 I have always loved Greek Mythology and Hercules was one of my favorite stories as a kid.  So to see him get the big screen Disney animated treatment was exciting for me.  This came out right near the end of the 1990s when Disney animation was having its renaissance after Beauty and the Beast, Aladdin and The Lion King so expectations were high.  Hercules meets those expectations…sort of.

The movie is good.  It has catchy music and great animation.  The heart of the film is a classic hero’s journey that everyone can get behind.

The problem is, in comparison to what else came out from Disney in the 90s, Hercules just does not quite measure up.

Don’t get me wrong, I enjoy this movie.  It is solid and it features one of the best villains in Disney’s pantheon of classic villains with Hades (James Woods) and an impressive voice cast that included Danny DeVito, Bobcat Goldthwait, Rip Torn and Tate Donovan (as Hercules).

Perhaps the pacing of the film is a bit off for me.  It really is fast paced, flying from one major moment in Hercules’ life to another with very little time for reflection.  The character of Meg does not do much for me either.  She is basically a damsel in distress that has a dark secret.  Nothing here that we haven’t seen before and every aspect of the character of Meg felt false.

Still, there are tons of pop culture references (Paul Shaffer as Hermes, the Messenger God is inspired) that are fun and creative.  Hercules’ friend/pet Pegasus is fantastic.  The Gods of Olympus, for the most part, have excellent character designs.

Of ocurse, Disney had to alter Hercules’s story so Zeus and Hera were his parents.  In the actual Greek myth, Hercules was born of an earth woman, one of Zeus’s affairs and Hera hated him. Hera was the character who sent the snakes to kill baby Hercules, not Hades.  I guess Disney did not want to show the negative family values that this myth inspires.

Overall, Disney’s Hercules is a good movie and certainly worth the watch.  It is short and flies by quickly.  It just does not have the same pizzazz as some of the other Disney animated films of the decade.