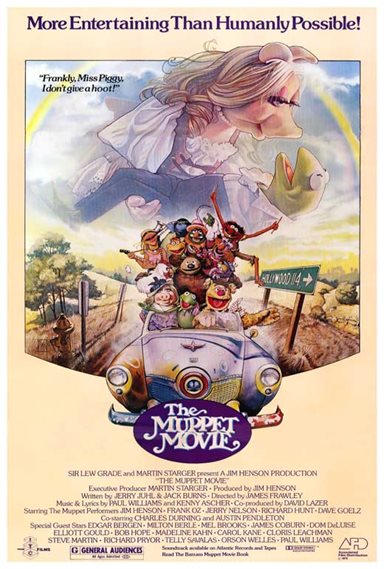 This year is the 40th anniversary of the first ever movie featuring the Muppets from Jim Henson’s company and I got  a chance to see it on the big screen thanks to a screening by Fathom Events. I had a smile on my face the entire time.

The movie is the story of how the Muppets came to be and how they made the movie that they were showing.  It was filled with fantastic corny jokes, running gags, and just roll-your-eyes humor that has been a trademark of the Muppets since day one.

And the music is brilliant.  I found myself singing along with the songs as each one appeared, staring with The Rainbow Connection, performed by Kermit the Frog in the middle of his home swamp.  Movin’ Right Along is another personal favorite which truly highlights the bromance between Kermit and Fozzie Bear.  Dr. Teeth (who, when I was a child, always scared me) and the Electric Mayhem perform Can You Picture That?  and Miss Piggy’s love ballad, Never Before, Never Again.  The finale with the song Finale: The Magic Store is a perfect finish to the music.  I remember listening to these songs on cassette tape and just loving them.  The music is created by Paul Williams and Kenneth Ascher and they do it masterfully.

As with any Muppet project, there are a ton of cameos appearing because everybody wants to be in a Muppet movie.  Bob Hope, Telly Savalas, Steve Martin, Dom DeLuise, Orson Welles, Mel Brooks, Madeline Kahn, James Coburn, Edgar Bergen, Milton Berle, Richard Pryor, Paul Williams, Big Bird, Carol Kane, Elliot Gould and Cloris Leachman.  That list of stars is beyond anything you could expect today and shows how much love these actors had for Jim Henson’s creations.

We also had Charles Durning appearing as Doc Hopper, the villain of the piece who chases Kermit across country trying to get Kermit to be the spokes-frog for his fried frog-legs restaurant.

There was such joy in the movie and I saw much more in this film than I saw the first times I saw it as a child.  There are a lot of beats in the film that are intended for the adults in the room, and the children will have a great time following along.  This is why the Muppets are such an engaging and entertaining group.

Jim Henson and Frank Oz did most of the heavy lifting here.  Henson performed Kermit, Rowlf, Dr. Teeth while Oz did Miss Piggy, Fozzie Bear and Animal.  Dave Goeltz was Gonzo the Great, Zoot and Dr. Bunsen Honeydew.  Richard Hunt was Scooter, Janice and Sweetums.  Jerry Nelson was Floyd Pepper and Camilla.  All of these Muppet performers had other roles as well, showing the versatility of the group with voices and acting.

The movie takes the idea of meta to another level-  Meta-Meta perhaps.  Or maybe Muppet-meta, with tongue planted fully in cheek (Kermit made a joke about his tongue early in the movie).  At one point, they give the screenplay of the movie to the Electric Mayhem so they can catch up on the story without presenting a bunch of exposition because repeating it all would bore the audience.  Brilliant.

The movie may drag a bit in the middle, but there is so much wonder around it that any criticism I may have for the movie feels lackluster.  This is a film that feels magical after 40 years and have stars made of felt.  The Muppet Movie is a triumph.