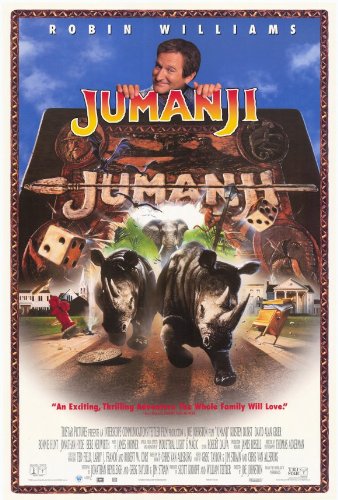 Next in the End of July Binge-Watch comes a film that I remember not being a big fan of, but upon second viewing, I liked more than I did.  The original Jumanji was directed by Joe Johnston and would eventually inspire a sequel called Jumanji: Welcome to the Jungle.

I love Robin Williams, but it would not be a shock to realize that he made many movies that were not very good.  I had always included Jumanji in that category, but I did like this better than the first time.

The story is simple.  Robin Williams plays Alan Parrish, a young boy who has an overbearing father.  Alan was being pursued by bullies yet his father went to send him to face his fears which led to him being beaten up.  After the attack, Alan found a strange game in a construction site and took it home.  The game was called Jumanji and when he started playing the game, with Sarah, the girlfriend of the bully who beat him up, he realized that it was more than what it seemed.

The special effects were not bad for the time, and helped propel the action.  In this movie, the game would release jungle creatures into the real world after each player’s turn was up and there were some terrifying moments.  The spiders, the crocodiles, and the lion balanced out the more humorous monkeys and mosquitoes.

The plot itself was pretty simple and the conclusion was predictable.  I can see why I may not have been a huge fan of this when I was younger as Robin Williams was not very funny in the role, at least what I expected for him to be.  Still, looking at it today, he brings his charm and wit to the role even if it is not the fall down laughing performance.

I would definitely say that I prefer the sequel to the original, but I found that this was much better than I remembered.