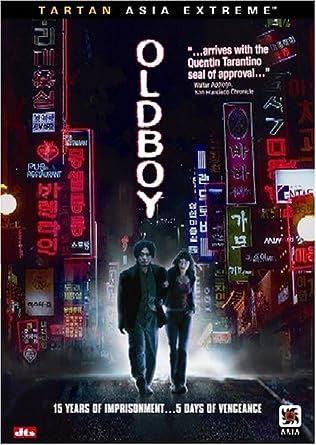 I have done another recommendation from the Top 10 Show for the End of July Binge-Watch.  Several times over the last few years, they have included the film Oldboy on a variety of lists.  Both John and Matt recommended that when watching Oldboy, to make sure to watch the Korean version.  Now, I have never been a fan of subtitles, having to read the movie, but I had a great time watching Train to Busan, which had subtitles, so I decided to try Oldboy as well.

Oh Dae-Su (Choi Min-Sik) was an obnoxious drunk who gets abducted from the street and held prisoner for 15 years in a small room.  The only human interaction he is given is through the television.  He is drugged whenever his captors required access to him.  During this time, Dae-Su is preparing himself for the time he can be free, training, digging a tunnel, anything else he could think of.

After 15 years, Dae-Su is simply released and invited to search out the identity of his captor.  Along the way, he falls in love with a young sushi chef named Mido (Kang Hye-jung).  The film turns into a violent revenge story as well as a mystery of why Dae-Su had been taken in the first place.

There were several shocking moments in this movie that made me squirm a bit.  The violence here is brutal and some times difficult to watch.

I will say that I had figured out the big twist earlier in the movie (or at least thought it could be the answer) so the reveal of that did not shock me as much as the film would have wanted, but the reveal was done very well and delivered a serious blow to the characters.

Once again, once I was engaged with the story and the brutality of the plot, the subtitles seemed to blend into the background.  I became less aware that I was reading them and everything just flowed with the story.  It is a weird circumstance that happened when I watched Train to Busan as well.

This is a tough watch.  Even though I had guessed the reveal at the end, the path getting there is hard and can be challenging to see.  There are scenes of torture and brutality that you do not see in a typical movie.  The film is shot beautifully as the use of these brutal images stick with you.  It is, most likely, a film that I will never revisit, but I am glad I got a chance to see it.