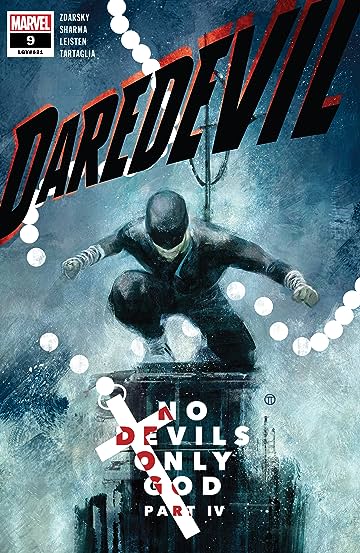 Chip Zdarsky has been taking Daredevil, or should I say, Matt Murdock on a journey through this arc of Daredevil of spiritual questioning.  Matt Murdock is lost, doubting his own faith, and uncertain of what he wants, needs or is expected to do.  And it is as compelling as it can be.

In a book that starts off with Matt playing chess and engaging in a fascinating discussion with Reed Richards about the existence of God, Matt continues to spiral out of control.

Having given up being Daredevil, the call of the vigilante life keeps pulling on Matt, with forces around him pressing him back to the life.  Or is it a sign from God?

These questions are within the book, but the character of Matt Murdock is having a tough time dealing with those pressures.  The ending event of this issue was shocking for a man of faith as Matt Murdock and really goes to show how lost he has become.

The side story with vigilante-hating detective Cole North took a turn in the book as well, creating a bigger problem for Detective Cole than just the spandex crew he is after.

This book is heavily dialogue driven, but it works well.  Daredevil has been through many highs and lows in his life, and Zdarsky has taken those and built a realistic and deep set doubt inside Matt that has shaken the man to the core.

I would be remiss if I did not mention the beautiful interior art from Lalit Kumar Sharma.  The shades and the imagery perfectly corresponds to the crisis of character happening inside Mat Murdock’s soul.  There is a realness to it, a texture that fits wonderfully with the story being told.  Finally, the cover by Julian Totino Tedesco is a piece of art worthy of hanging on a wall.