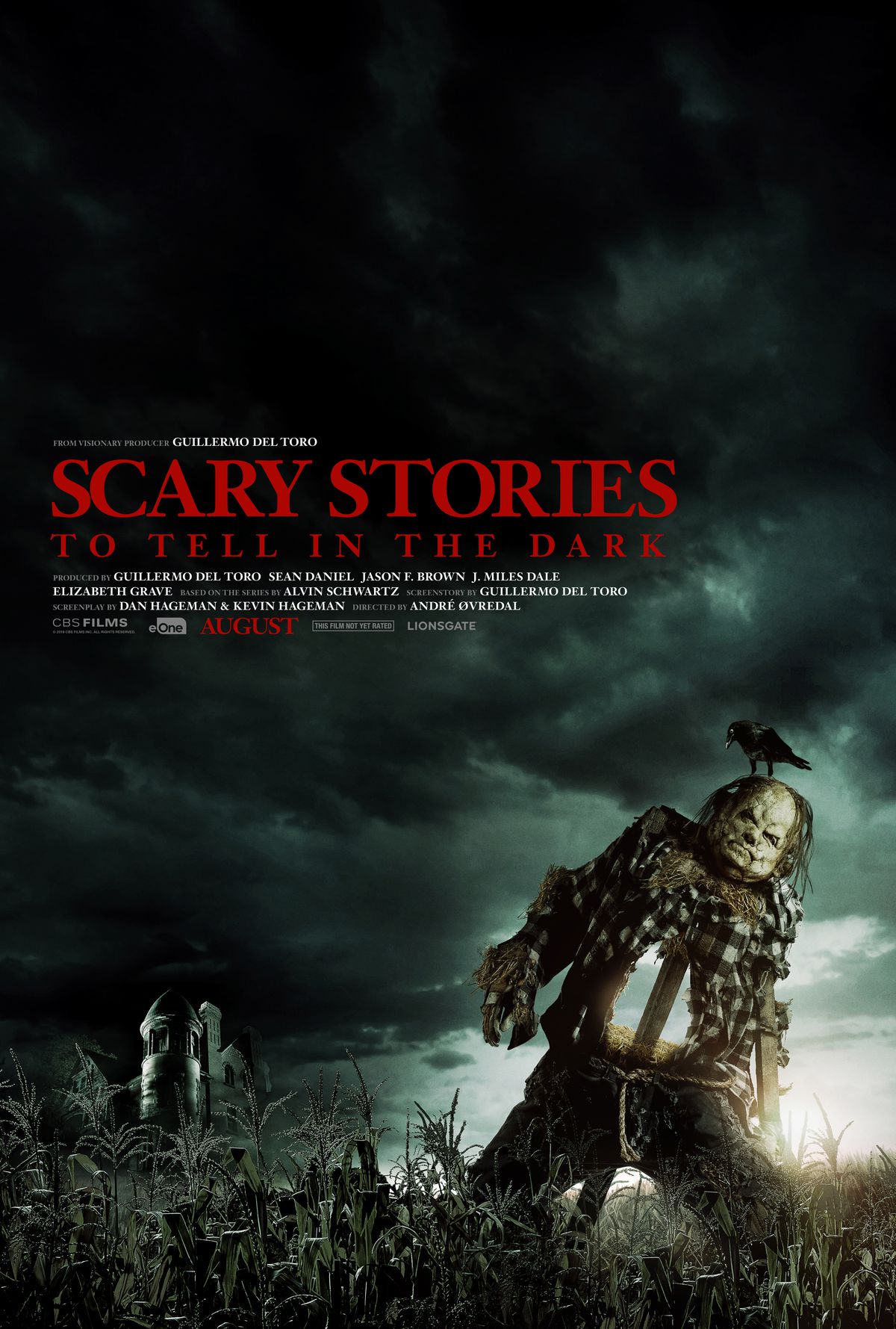 The latest young adult books to make the big screen is the Scary Stories to Read in the Dark trilogy, bringing an air of horror to the world of YA.

In the movie, we find a group of teens who go into the local haunted house on Halloween and find a book, allegedly belonging to the girl Sarah Bellows, who was rumored to have killed a bunch of kids by poisoning them before she hanged herself.  The kids notice soon that inside this book, stories are being magically written in blood and their friends begin dying.

This movie has a connective storyline throughout the film whereas the book series (there were three of them) is basically a series of short stories.  The short stories from the book wind up being used in the movie when Sarah’s ghost writes them.  This was a clever way to incorporate the stories into the feature film and make them viable and relevant to the characters that we have been introduced to.

And these characters are fairly likable.  Our main protagonist is fellow writer Stella (Zoe Margaret Colletti), who found the book at the haunted house and took it with her.  Colletti does a strong job leading the kids and showing the guilt and regret of starting this snowball metaphorically rolling downhill.  She has a background trauma involving her mother leaving her and her sad father (Dean Norris) too.  This is not dived too deeply into, but the subtext is there for the character.

We have the stranger in town, Ramón (Michael Garza), who has a story to hide as well.  He gets caught up with the kids, seeing early what happens when these stories start to appear.  Garza (who was in the Hunger Games series) has a nice presence about him and I think he has a nice career ahead of him.

Some of the moments in the stories are creepy and effective.  There is a specific scene involving Ruth (Natalie Ganzhorn), sister of Stella’s friend Chuck (Austin Zajur), that was creepy as all get out and gross.  Hint… there are spiders.

One of my problems with the film was that it was set in 1968, but I did not feel as if it were set during that time.  Oh sure, they hit us over the head with allusions of the period (Nixon being elected president, Vietnam war etc), but the kids did not make me feel like they were from the 1960s.

This was produced by Guillermo Del Toro and he has always been effective with his horror.  This was a PG-13 film so there was not much blood or gore, but they were very effective with their creepy crawlers and gross-looking creatures.  The creature at the hospital looked silly at first, but I have to say, what happened with it was one of the scarier moments of the film.

I came out of this movie enjoying my time watching it.  Sure there are some problems in the basic narrative and a few of the designs, but nothing too bad that it pulled me out of the film.  This is a decent way to introduce some teens to the world of horror, and I believe that is one of the goals of this film.