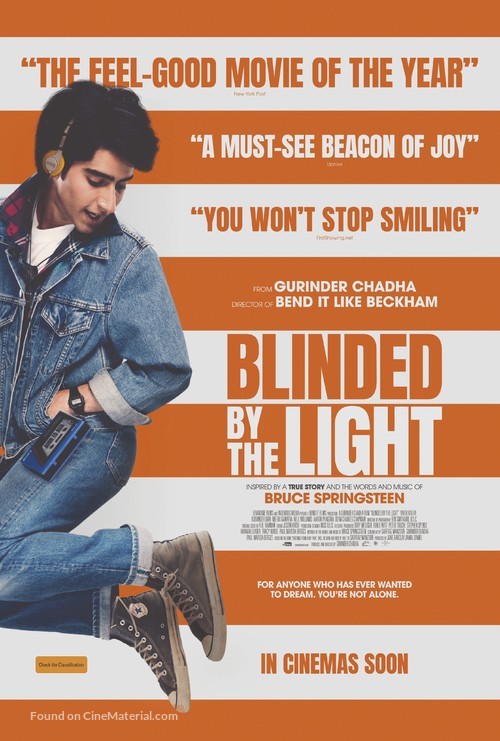 While I am, at best, someone who does not mind the music of Bruce Springsteen, I loved the new movie Blinded by the Light, directed by Gurinder Chadha.  Inspired by a true story, this movie is part musical, part rock anthem, part family drama and part coming of age movie all blended together into an engaging mash up of genres.

Javed (Viveik Kalra) is a teen in 1987 England, hoping some day to be a writer, but dragged down by the life around him.  He has a family dominated by a father whose old school ideas come straight from Pakistan.  He has a country that is chanting “Send them back” to Pakistani-English citizens.  The country is in the midst of a terrible job shortage, causing trouble among the people.  This leads to self-doubt, bordering on depression, for Javed.

However, Javed’s life takes a turn when a friend named Roops (Aaron Phagura) introduced him to the music of “The Boss” Bruce Springsteen.  Javed felt as if the lyrics of the songs were speaking directly to him, putting into words the pain and frustrations that he felt as a teen in this world.  The music of Springsteen inspired Javed to look to change his life, despite the push back he received from his father Malik (Kulvinder Ghir).

Malik lost his job and the family had to struggle mightily just to find enough money to pay the bills.  Meanwhile, Javed’s teacher Ms. Clay (Haley Atwell) is continuing to encourage Javed to keep writing, to find his own voice.

Blinded by the Light is a wonderful movie filled with hope, energy and a story of inspiration.  Fact is that the movie is not about Bruce Springsteen.  It is about finding that thing/person who can inspire you to make the change you want in your life.  It is also about the ties of the family and how they can make you who you are, even if that is not who you want to be.  The use of Bruce Springsteen is simply because that was the musician who inspired the real life Javed.

The film uses the music in some exceptional ways.  Many times the songs that Javed are listening to on his Walkman have the lyrics plastered across the screen.  These are moments when the lyrics of these songs echo the situation that Javed found himself in.  Other times, Javed would start to sing along with the cassette tape and suddenly we have a flash mob type situation where the crowd around are getting involved as well. This is when the film transcends into a rock fantasy/rock anthem movie-almost dreamlike, and these times all work.  I sat there watching these scenes with a big smile on my face.

The relationship between Javed and Malik was key to the film too and I had tears in my eyes during the third act when this relationship took front and center.  Add to the normal parent/son troubles with the culture of the Pakistani people and there are fireworks just waiting to explode between them.  Javed’s monologue in the third act is an absolute tear-jerker.

Viveik Kalra was remarkably charming and easy to root for, making Blinded by the Light a joyous film.  Eliza (Nell Williams) was Javed’s love interest in this movie and they had lots of chemistry and the film told a sweet love story for these two.

It might have been a touch too long in certain sections, but, other than that, there really are not much that I can criticize about this movie.

The movie focuses on Javed.  This is not the story of Bruce Springsteen and his music, but the story of Javed and how that music inspired him to be more than what he thought he could be.  The music and the lyrics gave him the belief in himself to face his life straight on and to make the changes he needed to make.  Blinded by the Light is a wonderful movie that I enjoyed thoroughly.