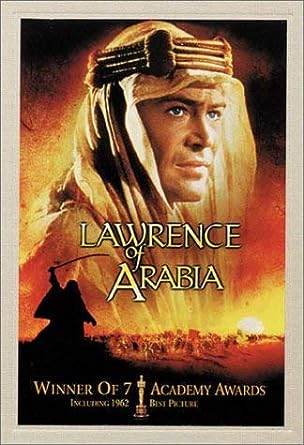 You can check another box off the list of movies I need to see.  Just got a big one done.

Yes, it took me the whole afternoon, but it was well worth it to finally see the epic of epics, Lawrence of Arabia, on the big screen thanks to Fathom Events.

Four hours later (after 3 hours 42 minutes of film time and a 15 minute intermission) I saw what one of my favorite online reviewer/personality Dan Murrell claimed was his favorite movie of all time and I could certainly understand why.

While it is not my personal favorite movie of all time, this is a special film that takes a historical figure and immortalizes him to the nth degree in a brilliant manner.  Director David Lean gives us everything we could ask for and more in this film.

British officer T. E. Lawrence (Peter O’Toole) becomes involved with the tribes of Arabia during World War I against the Turks, leading these people in an almost mythical manner.

There are some wonderful performances in this movie, starting with Peter O’Toole’s brilliantly soulful lead role.  He was an unexpected choice for the role, but he turned out to be perfect as the British officer.  Obi-Wan himself, Alec Guinness is here too as Prince Faisal.  Honestly, I was trying to find Guinness through most of the movie and I did not see him until late in the run time.  Anthony Quinn and Omar Sharif were amazing as heads of individual tribes working tentatively together thanks to the glue of Lawrence.  Fascinatingly, there is not one speaking part for a female in Lawrence of Arabia, a feat that probably would not go over well in today’s society.

I was surprised with how much humor was in this film.  There were some clearly funny lines and moments inside this dramatic masterpiece.

Peter O’Toole’s face sold every scene he was in.  The facial expression and his blue eyes were so on point that it is difficult to imagine anyone else in the role, but apparently the producers wanted Marlon Brando for the role and actually offered it to Albert Finney.  Cary Grant’s name was mentioned as well.  In the end, the proper choice was made.

There is no doubt that this is an investment of time, but I discovered that it is time well spent.  There is a reason why this is one of those films studied in film schools.  Lawrence of Arabia is a master stroke of filmmaking.