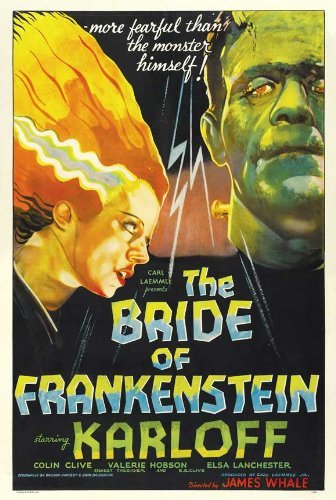 October is right around the corner and, for the month, I will be watching a series of horror films that I either have never seen before, have only seen parts of it, or haven’t seen for years.  I am starting off the October Horror Binge with one of the all-time classics of the Universal Monsters, The Bride of Frankenstein.

As I watched the movie, I realized that I have never actually seen the film before, outside of the iconic ending scene.

Boris Karloff resumed his role as the Monster and continued to show the tragic nature of this poor soul.  There is so much sadness in Karloff’s performance that you can’t help but feel for him.  The Monster simply is looking for a way to ease his pain, whether it be physical or emotional.  Everyone reacted to the Monster with fear and anger and the Monster’s response was violence.  However, those who were kind to him could make a connection.

I had no idea that the famous scene from Young Frankenstein with Gene Hackman as the blind man was actually a parody of a scene from The Bride of Frankenstein.  It was nearly impossible to watch The Bride without remembering that hilarious Mel Brooks film and Gene Hackman’s amazing work.

Directed by James Whale, The Bride of Frankenstein is a masterpiece of monster movies.  The film is quite subversive as well, with many hidden concepts that can be representative of many deeper, philosophical experiences.

It is amazing as well that the title character of the film is really barely in the film.

The first of the horror films for the October Horror Binge starting in September… is an influential and iconic film, beautifully shot with a tone of eeriness.