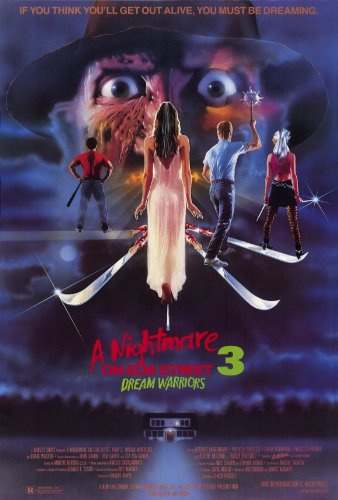 The first Saturday evening in October 2019 and I am continuing the October Horror Binge that I started last week while the calendar still said September.   Now that it is officially the All Hallow’s Eve month, we can resume watching those scary stories from the big screen.

I was a fan of the title song by Dokken, and, I have a slight memory of renting the VHS when I was younger.  This came out the year I graduated from high school and I was not a slasher film fan, but I remember renting it.  However, as I watched the film tonight, there was little about it that I remembered so it is possible that I did not pay too close of attention to the movie when I watched it back in the late 1980s.

I watched it closer tonight and I enjoyed it much more than the first time.  It was fun with the return of Nancy (Heather Langenkamp) from the first film.  There is a group of new young characters, led by a young Patricia Arquette.  Some of the acting was questionable, but for a slasher movie, they were fine.

Freddy Krueger continues to be the man when it comes to creative kills and you can see why he became an icon in the world of horror.  I’m not sure if I am going to watch any of the other Nightmares, but Dream Warriors is great.