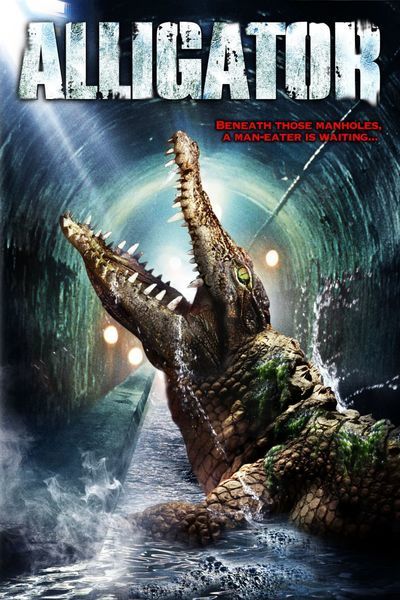 This episode, they were speaking about the career of recently deceased actor Robert Forster and Bibbs mentioned that one of his favorite performances of Forster’s career was in Alligator.  I had never heard of this movie before, but I really enjoyed this year’s Crawl, which was about killer alligators so I thought this would be a good lazy Sunday feature to continue the October Horror Binge we are doing here at EYG Doc’s Classic Movies Reviewed.

If you were to describe this movie as Jaws with an alligator, you would not be too far off.  There is even a musical score that sounds pretty familiar when the alligator is coming up on a victim.

Robert Forster played David Madison, a police detective with a tragic past, who encountered a giant alligator in the Chicago sewer system.  The alligator had been flushed years prior and had been exposed to an experimental growth hormones and had grown to a massive size.  The alligator began feeding on more than disposed carcasses of laboratory test animals, causing a panic among the public.

This is clearly a B-movie, and it is full of cheesy moments and silly situations.  All the crummy characters the film introduced find their way into the gaping jaws of the alligator, making you almost cheer for the creature.

There is even one scene, set at a wedding of all things, that makes me think about scenes from the old 1980s TV show The A-Team.

This alligator is able to make his way around Chicago really well.  One scene he is in the swimming pool of a child’s party and the very next scene, he is in an alleyway ready to eat up big game hunter Brock (Henry Silva) in a scene reminiscent to the eating of Quint in Jaws.

The script is witty at times and does go out of the way to develop the character of Madison more than these types of movies usually do.  The film tosses oddball characters at Madison throughout the film that seem to play up the cliches of the genre.

In the end, it is a silly movie, but undeniably fun.  Forster gives a solid performance and the special effects are, for the most part (with the probably exception of the A-Team scene) pretty decent.

Honestly, the similarities between this and Jaws are strong.  See them both.   Jaws is better.