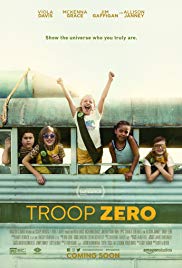 A snowy Friday night really restricts the chances of getting to the movie theater.  So since I will probably not get to see this week’s two new releases until Sunday, it is nice to know that I can still find some movies to watch and review thanks to streaming.

In this case, it is Amazon Prime where I discovered the new film called Troop Zero.

Young girl with the white hair, Christmas Grace (McKenna Grace) is fascinated by the stars and outer space and, when the chance came around to get her voice on a record that was being recorded to send out to space, she would stop at nothing to win that prize.  Even if it means joining the Birdie Scouts, a Girl Scout-like organization.

However, Christmas had to find other members to join the troop which turned out to be a difficult chore.  Christmas compiled a group of local quirky kids such as the hellion Hell-No (Milan Ray), the silent but deadly Smash (Johanna Colon), the gender confused Joseph (Charlie Shotwell) and the one-eyed evangelist Anne-Claire (Bella Higginbotham).

This film has a lot of heart and it is not afraid to show a group of kids who are extremely different as the leads of their movie.  McKenna Grace carries herself amazingly well as she is given some very heavy lifting by this plot.  The character beats she played are extremely strong and she is exceptional in the role.

All of the kids are very engaging and fun to watch.  There are some wonderful moments between Viola Davis and Allison Janney, two of the best actresses you will find.  Both take what could be stereotypical, one-note characters and bring them to life with their strong work.

Yes there are some cliches here.  The mean girl Birdie Scouts are the same in every film like this.  There were a few other moments that would fall under spoilers that were cliched.  The film countered that with some extremely original characters and allow the children to explore these characters.

In the end, this is a sweet and kind movie with a positive message and some solid performances.  There are some emotional moments as well and the finale is unexpected.  Troop Zero may have some connections to other movies of the same type, but I enjoyed watching this one.