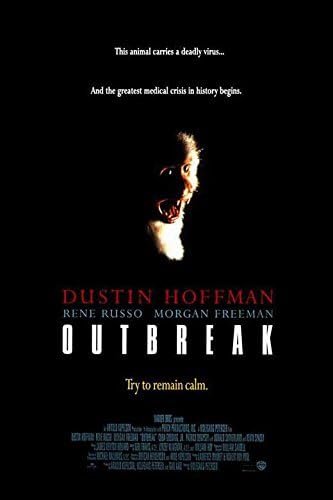 What better time to watch Outbreak than when the world is going crazy over the Coronavirus?

This Dustin Hoffman film is not as realistic as another film that I will be watching after this, but I have always enjoyed it nonetheless.

A deadly virus that occurred in Africa and a smuggled monkey host is brought to California, causing an outbreak in a small town called Cedar Creek.  As the CDC and the army tried to contain the virus, a certain part of the army looked to bury the news.

Dustin Hoffman played Colonel Sam Daniels, a rebellious military doctor, who is an expert in viral infections and contagious diseases, gets involved and leads the squad in the attempt to figure out what has happened.  His ex-wife, Rene Russo, is at the CDC and comes around to the outbreak too.

However, General McClintock (Donald Sutherland) is willing to do whatever he has to prevent the information on the virus to get out.  He orders General Billy Ford (Morgan Freeman), a friend to Sam, to keep him contained.

There is a lot of tension in this movie and it works fairly well.  Yes, there are a lot of contrivances and many of the things that happen are only because of coincidences and lucky breaks, Outbreak is a thrilling time.  Much of the movie requires quite a bit of suspension of disbelief.  In fact, there may be too much suspension at several moments in the film.

Still, I enjoy Dustin Hoffman’s performance and the action, especially in the helicopters, is well done.  The movie does not believe that the outbreak in Cedar Creek is enough drama to carry this movie which is why they bring the more fanciful aspects into the film.

I remember liking this a lot the first time I saw it.  Subsequent viewings have been entertaining, but not quite to the level of that first time.