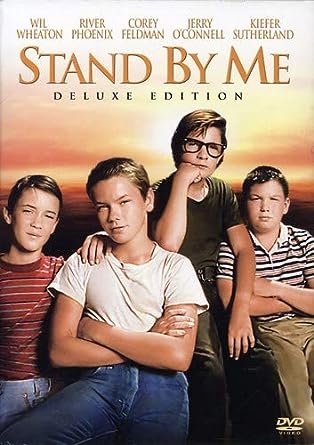 I thought that I had already reviewed this one for Doc’s Classic Movies Reviewed, but I could not find it on my list.  So, since I had started it on Roku, I figured I could finish it and review it.

Rob Reiner directed Stand By Me, one of my favorite movies.  Reiner has directed at least two others that I loved totally, The Princess Bride and This is Spinal Tap.  Stand By Me is the third.

Four friends discover where the body of a missing kid was at and they decide to travel along the train tracks to find the boy to become famous.  Along the way, the kids face challenges and dangers.

The four boys, played by Wil Wheaton, River Phoenix, Corey Feldman, and Jerry O’Connell, are remarkably well developed. Wil Wheaton is Gordie Lechance, a boy with the skill of storytelling whose brother died recently in a car crash.  River Phoenix is Chris Chambers, a boy from a rotten family who is seen as a thief.  These two are you main characters of the film and receive the most development.  Gordie’s older self (played and voiced by Richard Dreyfuss) acts as the narrator for the story and has the most powerful of arcs.

Corey Feldman played Teddy Duchamp, a kid whose father was abusive and held his ear to the stove.  Duchamp was an extremely complex character and they do a lot with less time with him.  Finally, Jerry O’Connell, in his film debut, played Vern, the least developed kid in the group but the one with the most innocence.

The interactions between these four characters are funny, powerful and real.  These kids talked like kids talk and they acted like 12-year olds.  The is a real depth to them all.  Even Vern, who is the least damaged of the crew, is more than what you see on the surface.

Kiefer Sutherland was here too, playing one of the biggest a-holes in the film as Ace.  Ace and his gang of thugs were one of the conflicts that the boys had to face and the stand off with them in the third act was full of tension.  There was also one of the most anxiety-filled scenes ever involving the boys, a bridge and a train.  I remember holding my breath the first time I saw that scene and today, it was every bit as suspenseful.

The story telling of this movie was great.  It set up scenes throughout the film and showed us how each one was important to the kids.  There was little wasted in the film and had purpose.  The writing was beautiful and the dialogue, particularly with the kids was spot on.

Based on a Stephen King short story called The Body, Stand By Me is a masterful tale of a group of kids and their path to adulthood.  It is a brilliant movie.