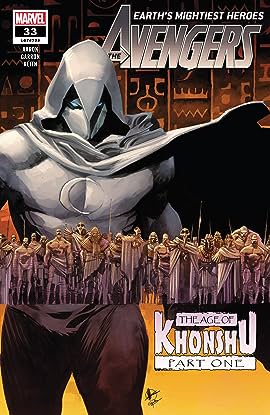 “Moon Knight vs. The Avengers”

The Age of Khonshu Part One

The Avengers return to start up a new arc featuring The Moon Knight called The Age of Khonshu.  Everyone’s favorite split personality hero is back and he is taking on the heavy hitters in an attempt to become Earth’s Mightiest Hero and he is well on his way.

While my first thought of placing Moon Knight into this situation was negative, I must say that I enjoyed the execution of the story.  The art is excellent and the individual battles between Moon Knight and the separate Avengers were intriguing.  There is clearly a mystery going on here and what the motives of Moon Knight and Khonshu are still up in the air.

The first part of this arc has, at the very least, hooked me enough that I am interested in seeing where it goes.  I have always enjoyed Moon Knight so it is nice to see him get his time in the sun (or Moonlight as the case may be).